Change your centre gem selection to this one?

Drawing together timeless design with modern artistry, our collection of platinum diamond engagement rings offers you an exciting selection of unique rings, allowing you to find a design that speaks to love you share with your partner. Certain styles determine the overall silhouette and impact of your engagement ring, so take time to consider if a solitaire, pavé, halo, or trilogy design is the one for you. From a gently curving oval cut to the striking angles of a princess cut, choosing the diamond shape best suited to your relationship is a great way to make your ring feel personal, so be sure to check out our full range of gemstones. Our designers draw creative inspiration from all over to bring you a diverse range of platinum diamond engagement rings, so explore our full selection of design styles below. 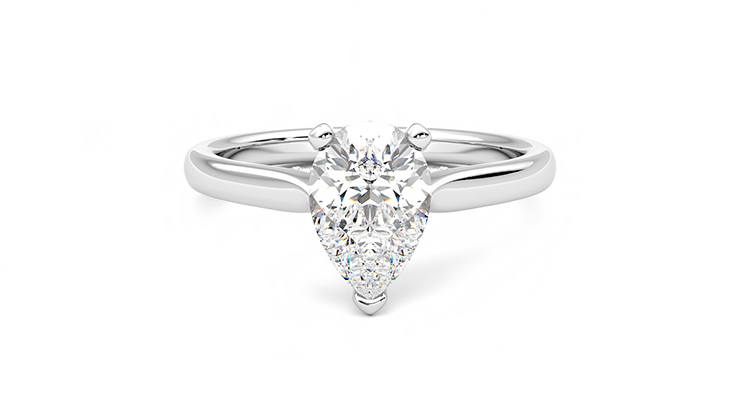 Platinum is an incredibly rare precious metal, composed of 95% platinum and 5% other metals, sometimes known as alloys. Along with silver, palladium and gold, platinum is one of the four precious metals, and the most exclusive of them all. Platinum is both dense and malleable, making it an ideal metal for crafting jewellery.

Platinum is found in small deposits all over the world, but today mainly in South Africa, which is responsible for 80% of the world’s production. Historically, early uses of platinum were found in ancient Egyptian burials and pre-columbian sites in South America.

In Europe, platinum was first discovered around the 1550’s, as it was mentioned in the writings of the Italian humanist Julius Caesar Scaligar who described the metal as ‘no fire nor any Spanish artifice has yet been able to liquify”. Platinum has a very high melting point at 1,768 C versus gold at around 1000 C.

Why should I choose a platinum engagement ring?

Due to its lustrous bright, white finish, platinum continues to be the most popular metal choice amongst our customers, with almost 60% of orders crafted in this glorious cool metal.

Although it commands a premium price point, platinum is one of the most economical and low maintenance metal choices. Buffing with a soft cloth doesn’t remove any layers, unlike gold, so its shine is easy to retain.

And if you haven’t been tempted already, platinum’s purity makes it naturally nickel-free and hypoallergenic, ideal for those with sensitive skin. In fact, 57% of our engagement ring orders are crafted in platinum.

Platinum rings are seen on the hands of a huge array of men and women across the globe. From pop stars to royalty, stars including Beyonce, Jennifer Lopez, Princess Beatrice and Pippa Middleton, don platinum engagement rings, enhancing their centre diamonds.

Platinum is an iconic choice when it comes to jewellery. Its naturally bright, white appearance will retain its beauty to ensure your ring will be treasured for a lifetime.

How much does a platinum diamond ring cost?

Platinum is both rarer and more dense than gold, so it’s more expensive. Due to its density, it takes more platinum than gold to create an engagement ring, raising the price of the engagement ring setting. As well as being dense, the rarity of platinum also raises the price. Only 160 tons of platinum are mined annually, as opposed to 1,500 tons of gold. In all, platinum is usually about 10-25% more expensive than 18ct gold.

The cost of a platinum diamond ring depends on the thickness of the band, and the size of the diamonds–essentially the weight of metal required for the design. A simple solitaire platinum engagement ring’s cost would begin at around £720, and then depending if the band has diamond pavé, it could cost around £1500 to account for the additional metal required to hold these diamonds in place. This doesn’t include the centre diamond, which is priced separately.

Why should you choose a platinum diamond ring?

Platinum is an iconic choice when it comes to jewellery. Its naturally bright, white appearance will retain its beauty to ensure your ring will be treasured for a lifetime. Platinum is the rarest metal used in jewellery, and more durable than gold. While platinum naturally develops a patina over time, all you have to do is polish it to get back it’s original luster! 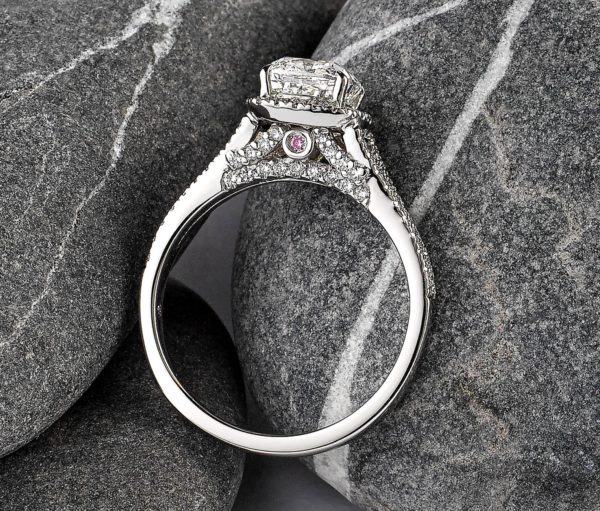 How do you clean a platinum engagement ring?

Over time, with everyday wear and tear, your engagement ring can accumulate dirt and grime in the crevices of the ring. However, a platinum engagement ring is easy to clean. There are multiple ways of cleaning jewellery, but the simplest way to clean your ring is to use a soft toothbrush. With a cup of warm water mixed with washing liquid, leave your ring to sit in the water for a few minutes. Then take a soft toothbrush and gently scrub the ring and gemstone, making sure to get all the dirt out of the grooves. After you are sure the ring is clean, rinse it in warm water and dry the ring with a lint-free cloth.

Use a jewellery polishing cloth to polish your ring in between cleaning sessions. Each of our engagement rings come with a Taylor & Hart branded cloth, so you already have all the tools needed!

How can you tell if a ring is platinum?

Platinum is heavier than gold, so if your engagement ring feels particularly heavy, this is a good indicator that your engagement ring is platinum. As one of the white precious metals, when compared to white gold, platinum has a slight grey appearance. White gold is usually plated with rhodium, which gives the metal a very bright, silvery white appearance. Platinum is more of a cool, icy grey, which when contrasted with a diamond, makes a beautiful combination for an engagement ring.

How do platinum and white gold compare?

What’s the difference between white gold and platinum? We’ve heard this question often and it’s easy to see why. Both metals have their pros and cons and while your choice should be based on personal preference, we always recommend choosing platinum if you desire a white metal.

White gold is a combination of naturally yellow gold and white metals like nickel, palladium or silver, which gives white gold a light grey colour. It’s then rhodium plated to give it its sought after bright appearance. Over time, rhodium plating wears away revealing a yellow tinge, which will need replating every 12-18 months.

While platinum does cost slightly more than white gold, platinum does not require the same level of maintenance. Platinum’s shine is easy to retain with a simple polish and works out to be a more economical choice over time. 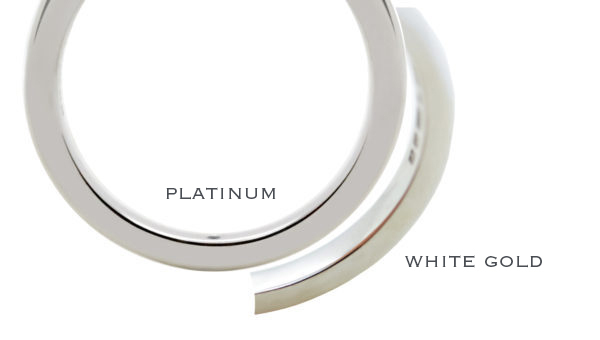 Do gemstones go with platinum?

Throughout the years, platinum has come in and out of trend as our design eras have changed. Platinum is a very popular metal for vintage engagement rings. During the Art Nouveau and Art Deco movement, platinum was even more popular than it was today! Platinum would be moulded into feminine swirls and lacy filigree flows, combined with luscious gemstones that defined early twentieth century design.

Platinum and emeralds make a beautiful combination for an engagement ring, the combination of the forest green and cool grey is timeless. Sapphires look incredible up against platinum, their deep and vivid tones are perfectly showcased by the bright colour of platinum. 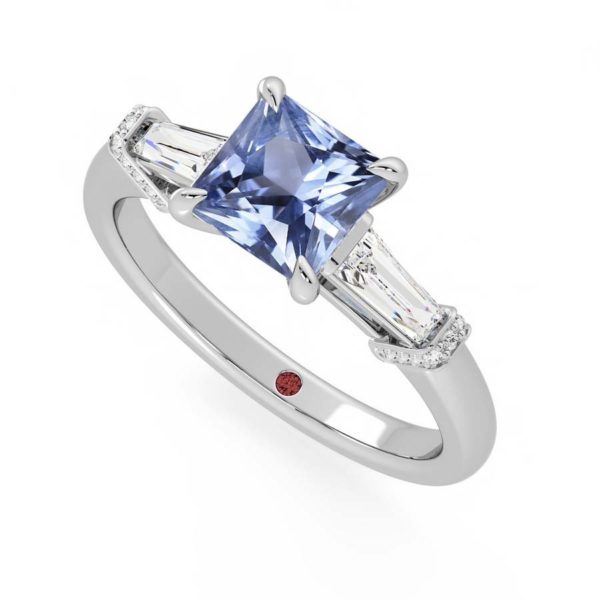 design your own platinum ring
Close