What is a Toi et Moi ring?

‘Toi et Moi’ is French for ‘You and Me’, a fitting title given this ring design’s sentiment and inspiration. Two lovers are represented by twin center gemstones that sit side by side on the ring’s band. A Toi et Moi ring is different from traditional engagement rings as it always features two diamonds or gemstones on a coiled or twisted band, symbolizing partnership and devotion. The gemstones meet together on the finger—a motif of two souls meeting as one.

The Toi et Moi ring design can be traced back to the 17th century, first seen in French Empress Josephine de Beauharnais’s royal engagement ring. Napoleon Bonaparte met the young widow in 1795 and fell quickly in love. Much against his family’s wishes as she was a widow with two children, Napoleon proposed to Josephine and she accepted. The ring he proposed foreshadowed a trend that would return again and again over the next four hundred years: a pear cut sapphire and diamond Toi et Moi ring.

Today, a Toi et Moi engagement ring can be crafted with any shape and color of diamond or gemstone. Designs often feature either a set of twinned identical diamonds but can be made more unique by using gemstones of varying cuts and colors. Contrasting gems are often used, just like Josephine’s ring which featured a combination of sapphire and diamond.

See the gallery below to browse a selection of signature Toi et Moi rings created by our team of jewellery designers. If the romantic Toi et Moi design feels like the best way to tell your love story, get in touch: we offer a complimentary custom engagement ring design service, making it easy to craft your own completely unique Toi et Moi engagement ring. 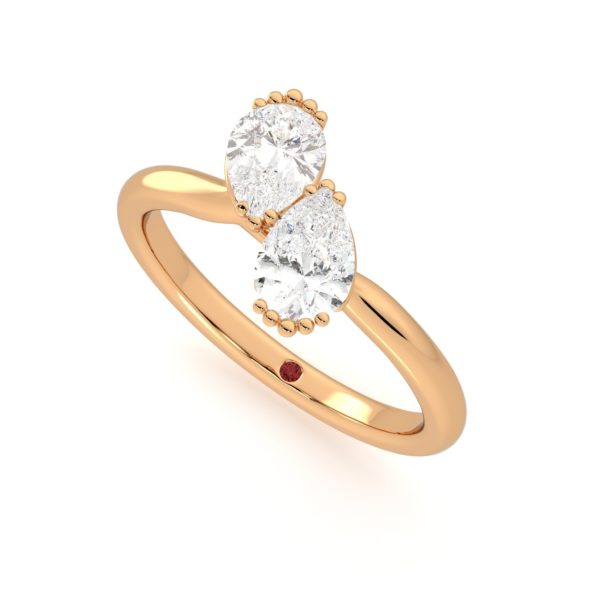 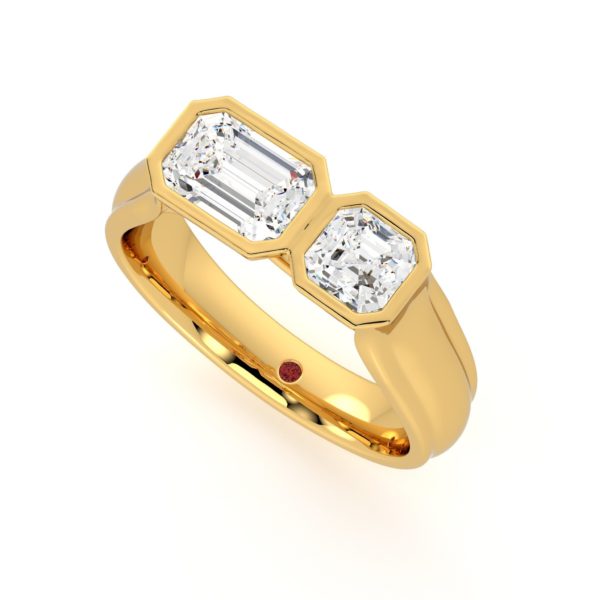 What should I consider when creating a Toi et Moi engagement ring?

There are a few key elements to consider before settling on your Toi et Moi ring design.

The shape of your diamonds or gemstones is the most important element to consider when choosing a Toi et Moi ring. Begin with a shape that you feel represents something unique about your partner, then think of your love and support can be visually captured by a different gemstone cut. If you aren’t sure, play with the idea of different fancy shapes until you find your ultimate combination. 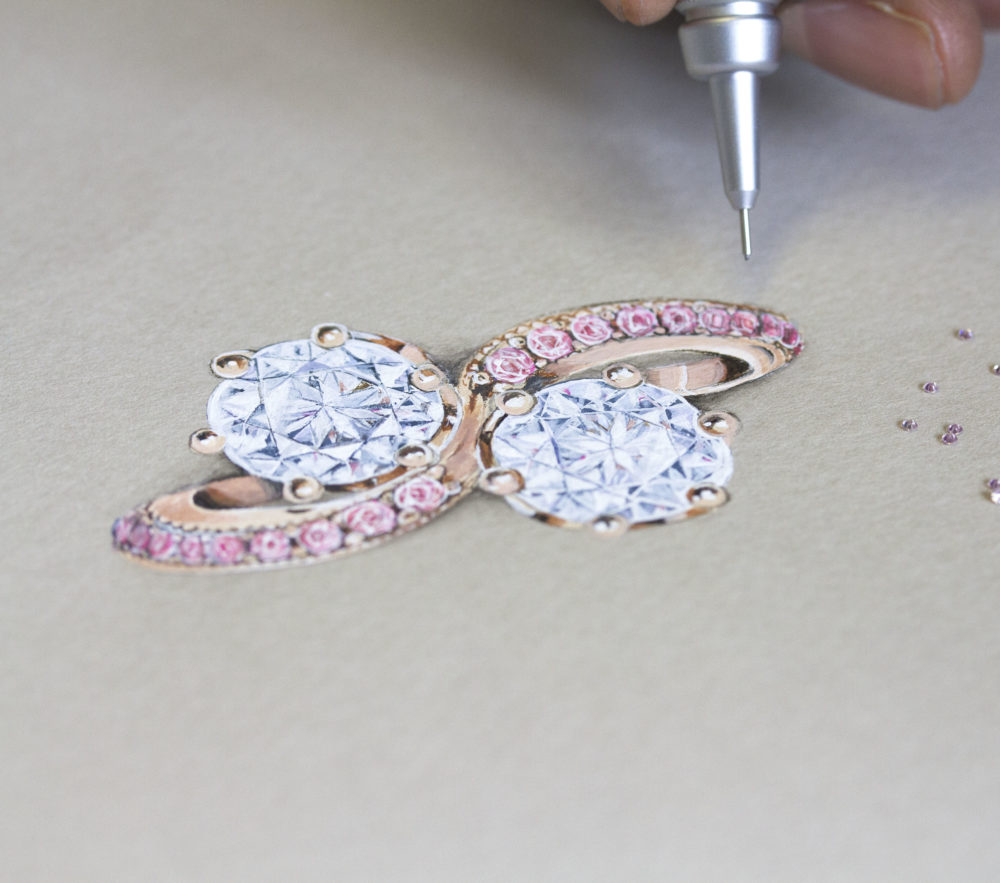 The size of your diamonds and gemstones also determine the presence and visual impact of your design. As a two stone ring, both gems are usually around the same size to maintain a sense of symmetry. Most of the Toi et Moi designs we create feature diamonds that are about 0.50ct-1ct in size. But for those looking for a more maximalist design, larger carat sizes can have a great effect. 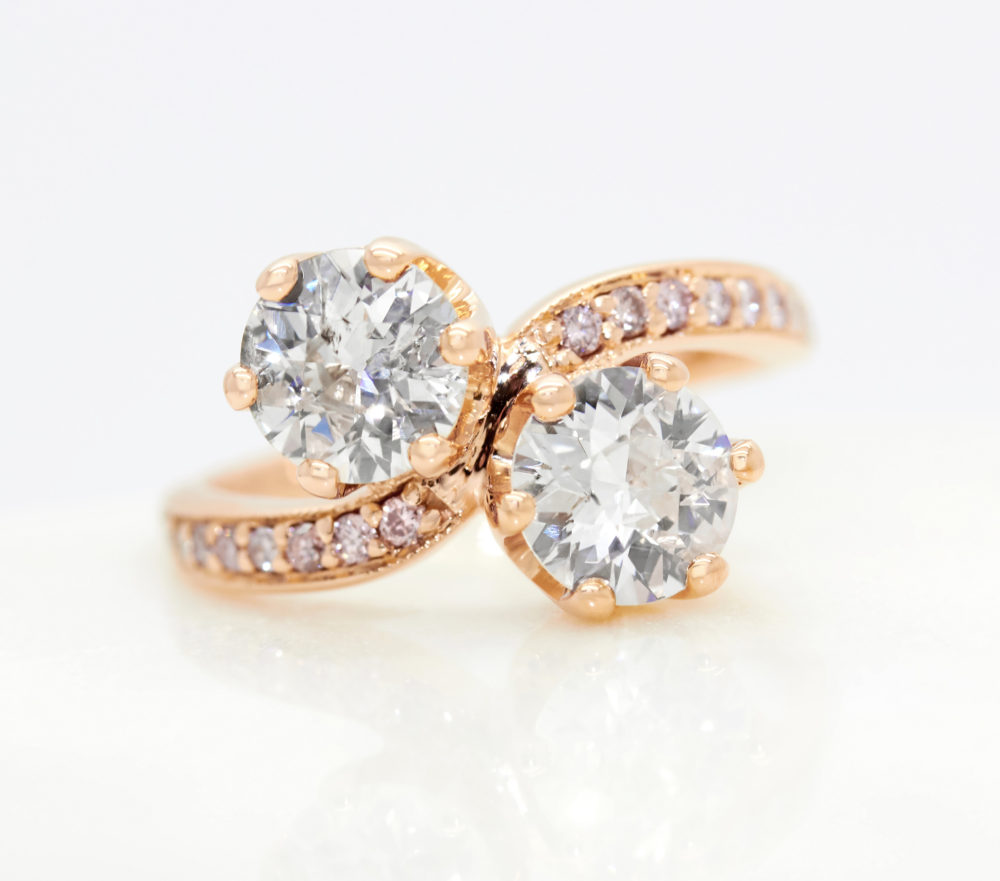 The colors featured in your Toi et Moi should have a personal meaning for the both of you. White diamonds are a classic as they represent devotion and eternity. Colored gemstones such as yellow diamonds, sapphires or emeralds all have different meanings. Why not go with your partner’s birthstone, favorite color, or a color that tells a story in your life. You can also cast your ring in different metal colors, such as platinum or 18K white gold for a cooler finish, or yellow or rose gold for something warm.

A Toi et Moi ring is the ultimate romantic expression of love, however the style isn’t limited to engagement rings. This design can be given as an anniversary ring as the two entwining gemstones tell the story of two souls standing side by side through time.

Two stone rings are also a popular gift for new mothers and new parents to celebrate the birth of a child. In this case the ‘toi et moi’ represents the unbreakable bond between parent and child, making it a perfect ring to pass down to the next generation.

In January 2022, Megan Fox became engaged to Machine Gun Kelly and stunned the internet with her magnificent Toi et Moi diamond and emerald engagement ring. Featuring a 3ct pear shaped diamond and what we estimate to be a 4ct pear shaped emerald, both stones are set upon a double curved pavé platinum band. The pear shaped stones come together to form an obscure heart, to represent their love.

We can comfortably say that Emily Ratajowski brought the Toi et Moi style back into the limelight in 2018, when she became engaged to her long time beau Sebastian Bear-Mcclard. Her contemporary ring features a 2ct princess cut diamond nestled next to a 3ct pear shaped diamond, set upon a 18K yellow gold band.

Ariana Grande’s Toi et Moi engagement ring is as soft and feminine as her public persona. Featuring a 3ct brilliant cut oval diamond, the center stone was set with a pearl taken from her grandfather’s tie pin, in a sentimental Toi et Moi design.

How to create your Toi et Moi ring

At Taylor & Hart, we offer a personal, custom ring service to help you design your dream engagement ring, starting from $2,500. Schedule an initial consultation to get paired with a design consultant and begin chatting about your ideas and inspirations. We’ll guide you to show you all the available options for your Toi et Moi ring, including diamonds, gemstones, shapes and styles.

The design process can be completed in as little as twenty days, so get in touch today to begin the process.