as seen on screen

design your own jewellery

As Seen on Screen

With many of us spending more time than ever at home, streaming and gaming have become hugely popular – leaving us all wondering, how much would that cost in real life? We’ve taken a look at some of the most iconic pieces of on-screen jewellery to see which is really the most valuable.

Whether you’re rewatching your all-time top series, discovering your latest gaming obsession or bringing home the magic of cinema into your home, there’s no denying that jewellery and accessories play a huge role in our favourite TV and films – let’s not forget that Thanos snapped half of humanity out of existence with a jewel-embellished glove in Avengers Infinity War.

Here at Taylor & Hart, we know how big a part your favourite shows, films and games play in your life – and over the last year we’ve spent more time than ever with our favourite characters. We’re frequently asked to incorporate people’s beloved pop-culture moments into their proposals, by fusing their favourite moments, iconic looks and themes with wedding and engagement rings.

With this in mind, our Design Director, Kate Earlam-Charnley, has taken inspiration from some of the requests we’ve had for designs and looked at some of the most famous on-screen gems to rank them by value and delve into their details.

Ranked: The most expensive pieces of fictional jewellery

Precious metals, unique gems, special abilities and rarity have all come into play to create this ranking as many on this list are stuff of legend, mythical powers or out-of-this-world materials.

The top ten most expensive pieces of fictional jewellery

1. the heart of the ocean

In at number one is perhaps the most legendary and sought-after on-screen jewels, the Heart of the Ocean. Featured in James Cameron’s 1997 smash hit, Titanic, and worn by Rose (played by Kate Winslet) this rare beauty drives the plot of the film and gets its own interesting back story throughout. This necklace features a deep blue, heart-shaped fancy fiamond of 25.52ct, which is based on one of the real world’s most elusive pieces – the Hope Diamond and comes in at a huge £254,000,000. 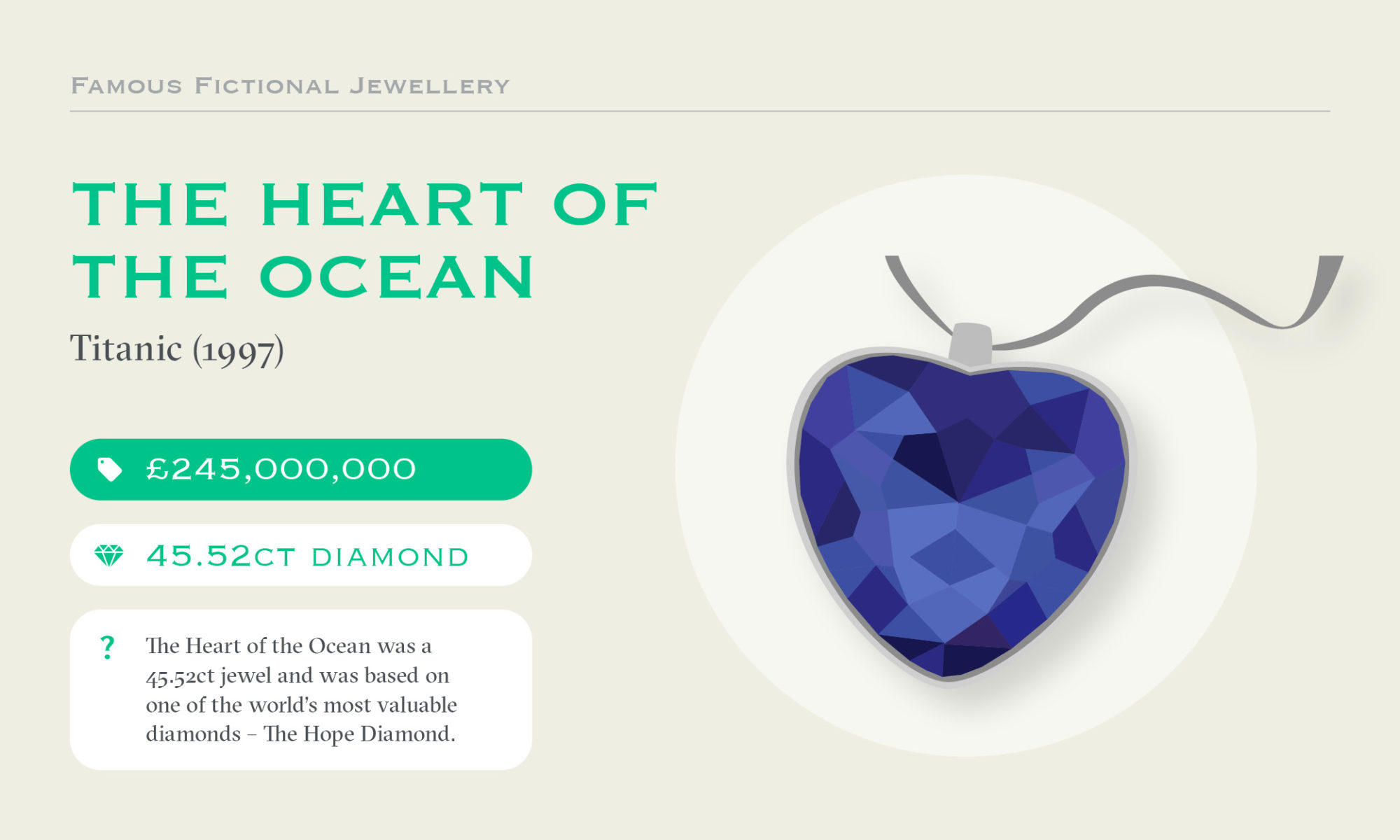 Perhaps surprisingly, the Princess of the Mushroom Kingdom’s Crown is number two on our list. Whether she’s battling Bowser, racing down Rainbow Road or taking it easy with the Toads, Princess Peach is rarely seen without her crown. What could be more fitting for this Princess than a 175ct peach sapphire in the centre of this crown, flanked by Paraiba tourmalines of a similar size and carat. The value of these, combined with an estimated £37,800 of the metal to hold them, brings the total value to £240,000,000. 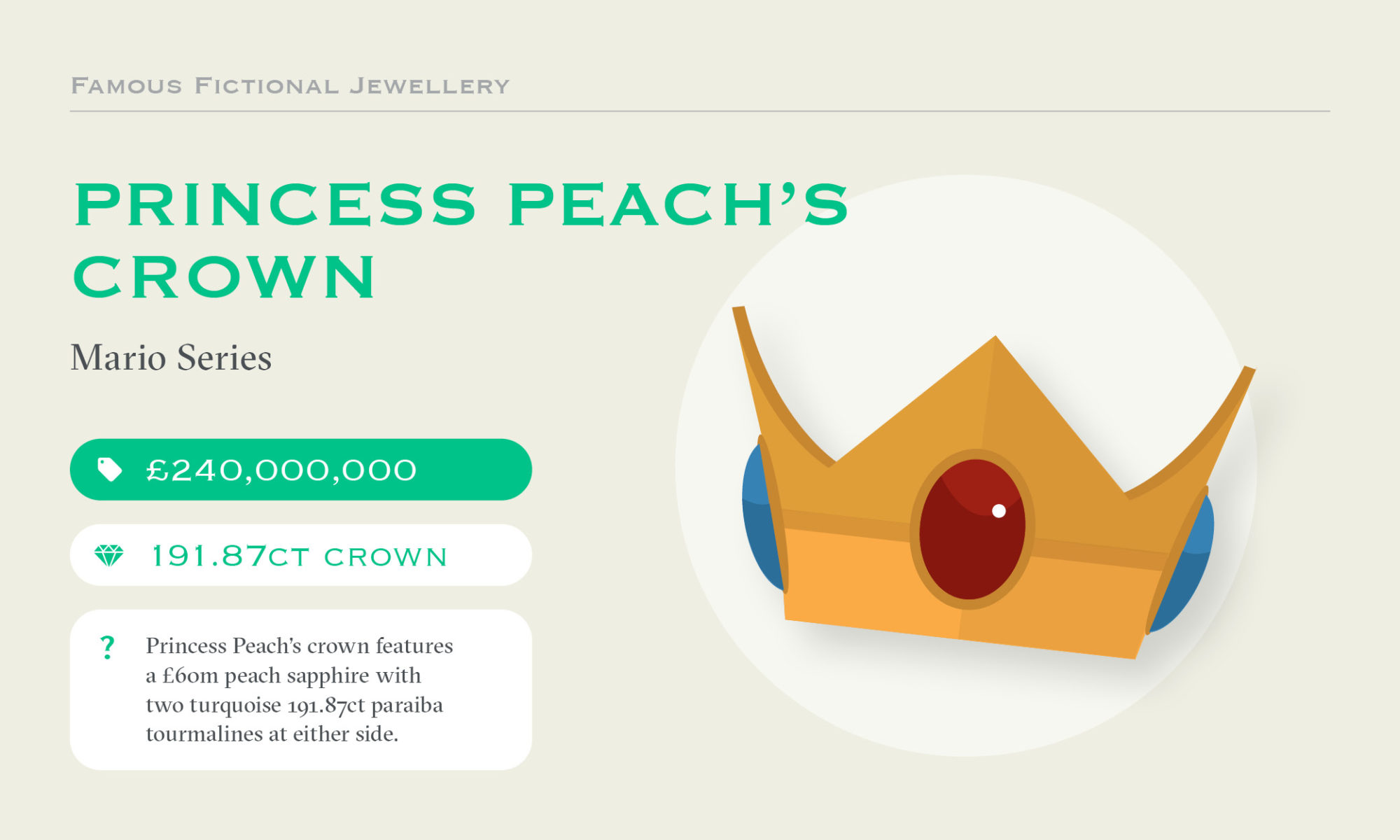 Not only does it wield the greatest power in the universe, but it holds huge value thanks to its precious gems and rare metal. The Infinity Gauntlet is, of course, from the cinematic events of the century – Avengers Infinity War & Avengers End Game. The gauntlet itself is made from Uru, a fictional metal whose closest comparison has been found on Jupiter, bringing its estimated cost to just shy of £1,000,000. Now for the gems – the Reality Stone (red, likely ruby) has by far the highest price tag, at £15,000,000, then we see the following: the Mind Stone (yellow, likely sapphire) at £400,000, the Power Stone (purple, sapphire) at £350,000, the Space Stone (blue, sapphire) at £300,000, the Soul Stone (orange, sapphire) at £275,000 and finally, the Time Stone (green emerald) at £175,000. These bring the total cost to £17,490,000. 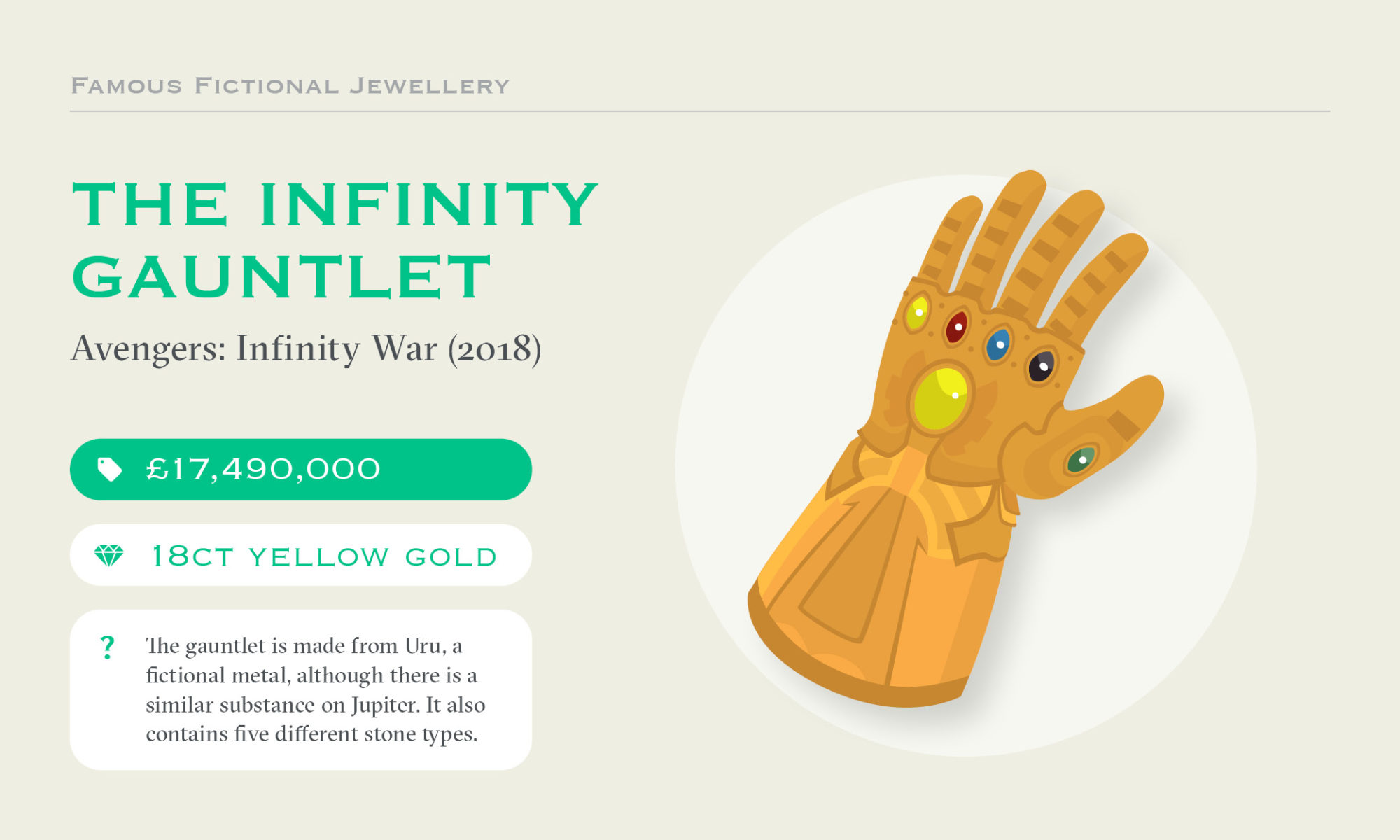 Perhaps one of the most iconic on-screen pieces of jewellery, the necklace worn by Marilyn Monroe as Loralei Lee during her Diamonds Are A Girl’s Best Friend routine from Gentlemen Prefer Blondes, has become synonymous with the golden age of cinema. Believed to be Harry Winston jewellery on loan, the piece actually layers two necklaces to achieve the look. The first is a Tennis Necklace featuring 9 3.ct Pear Drop Diamonds and 75 0.35ct Round Diamonds, and the second is a choker with a 5.0ct Centre Oval Diamond, approximately 105 0.90ct Round Brilliant Diamonds and two halos of 36 0.25ct diamonds. Combined, these necklaces combined are estimated to be worth £895,732. 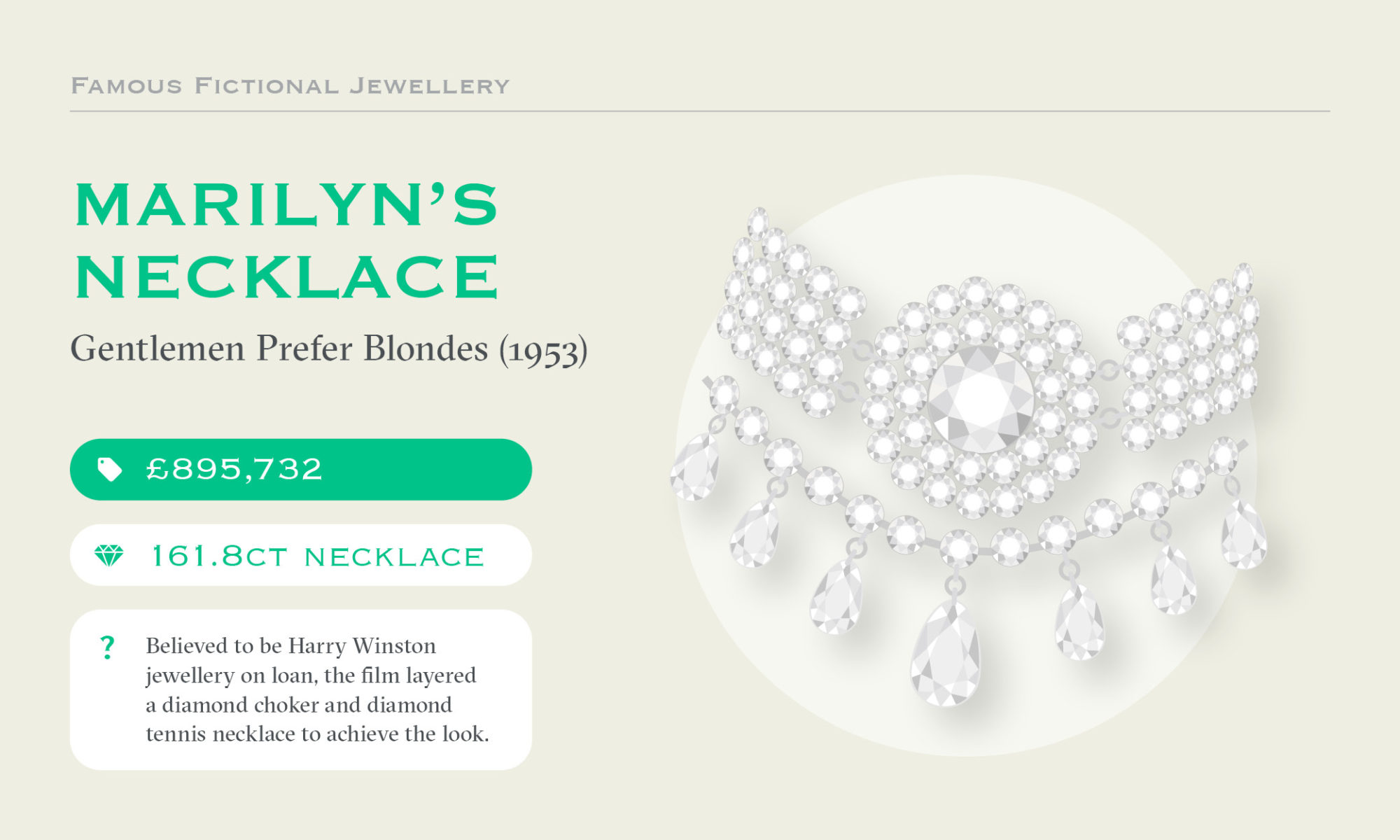 Julia Roberts’ role as Vivian Ward in Pretty Woman is one that has, and will continue, to go down in cinema history. The iconic transformation scene featuring the off-shoulder red dress sees Vivian wearing a breath-taking necklace, which was custom-made by Fred Joaillier. The necklace has 22 heart-shaped Rubies with a total carat weight of approximately 15.4cts which are surrounded by 18 0.10ct diamonds – a truly one-of-a-kind piece which even had its own security during filming. This necklace comes in at £178,000. 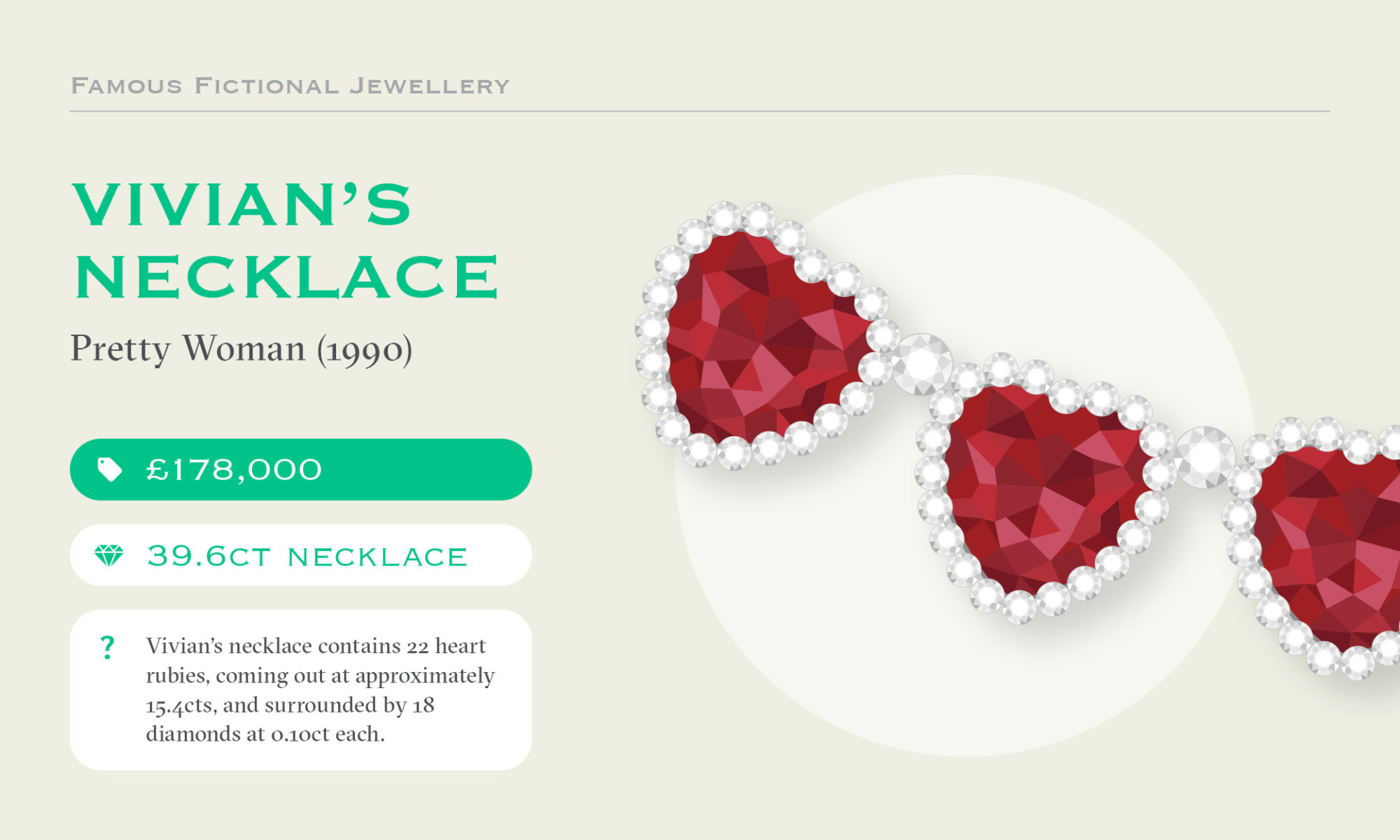 Perhaps the most recognisable item from Minecraft, the Diamond Sword is the game’s most expensive item to craft. In reality, a diamond this size has yet to be found, and if it ever was discovered there’d be no telling what price it would bring to auction. With that in mind, the value of a sword entirely set with diamonds – of which you’d need 2722 – would be looking at a top value of around £165,000. 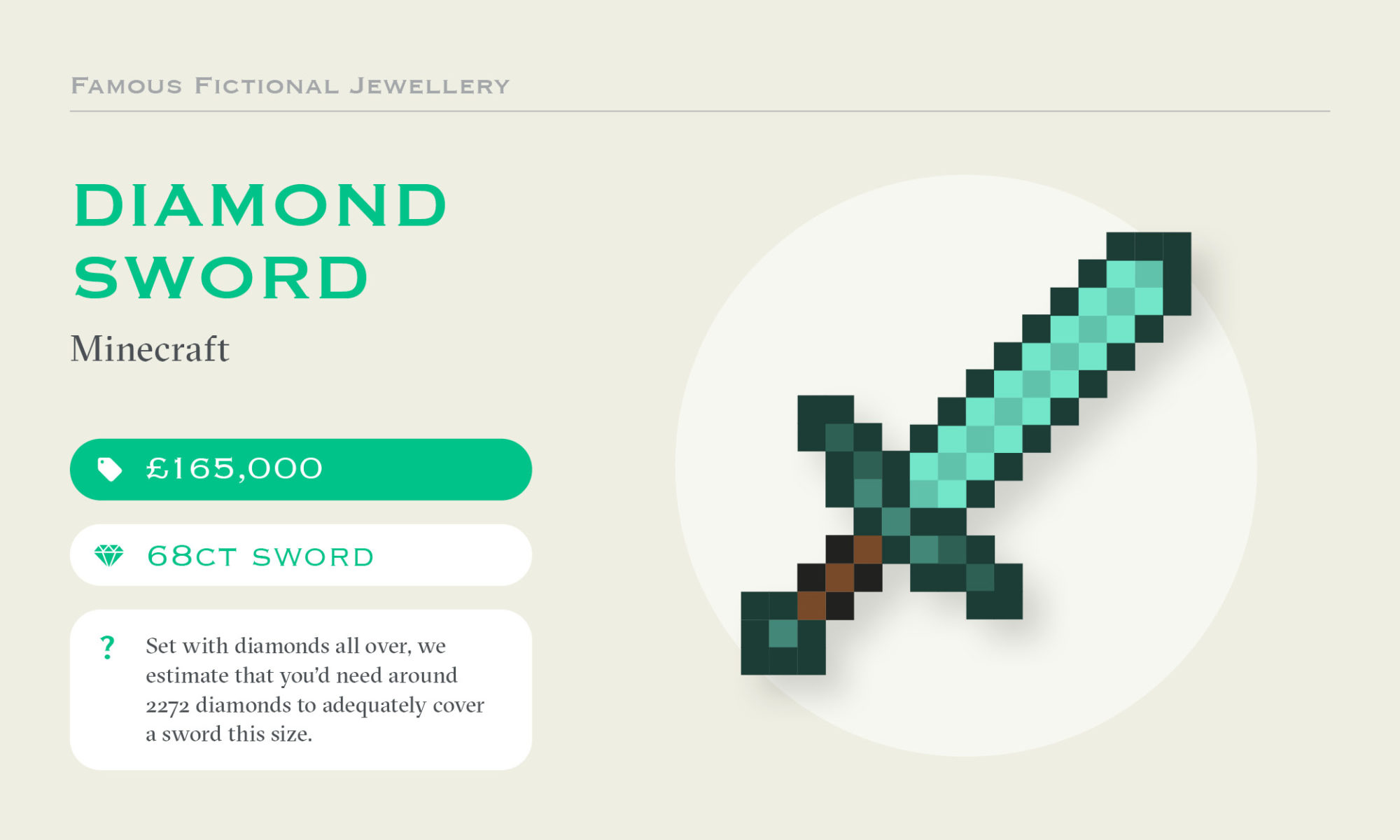 One of the biggest questions of the 00s was ‘what did happen to Bella Goth?’. The infamous Sims 2 character allegedly disappeared from her wealthy husband and their children in mysterious circumstances and has since appeared in every game in the series. Her story seems to vary but her jewellery never does. It’s estimated this earthy green gemstone would be around 70ct, bringing an approximate cost of £80,000. 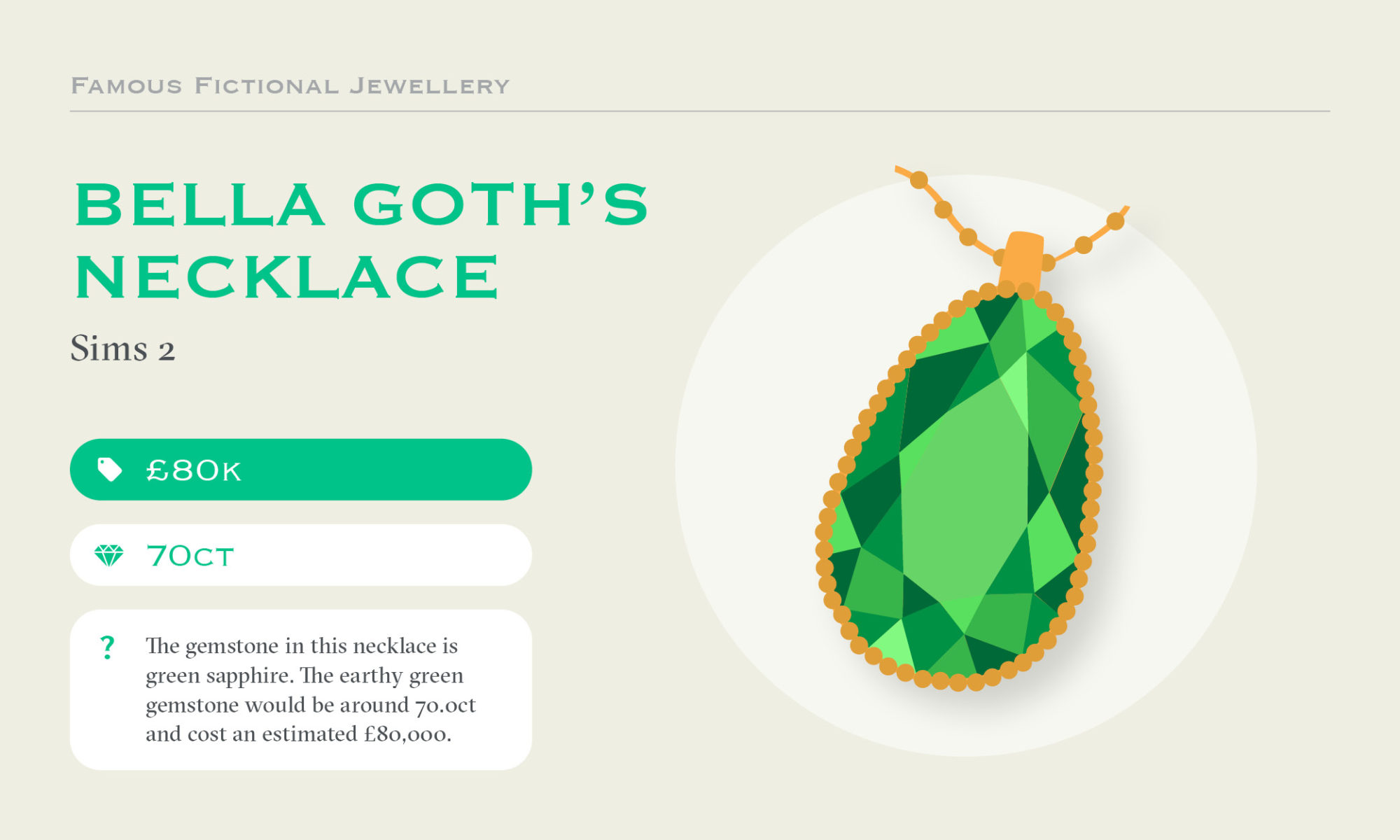 Eight years on from its release, we just can’t let Frozen go. Luckily for us, one of our favourite pieces from the film also made an appearance in its sequel as the Throne of Arendelle changed hands. Elsa’s (and later Anna’s) crown from the Frozen series features a 4ct pear shaped, light-blue sapphire in an 18ct yellow gold kite shaped crown. We estimate this crown to be worth around £75,000. 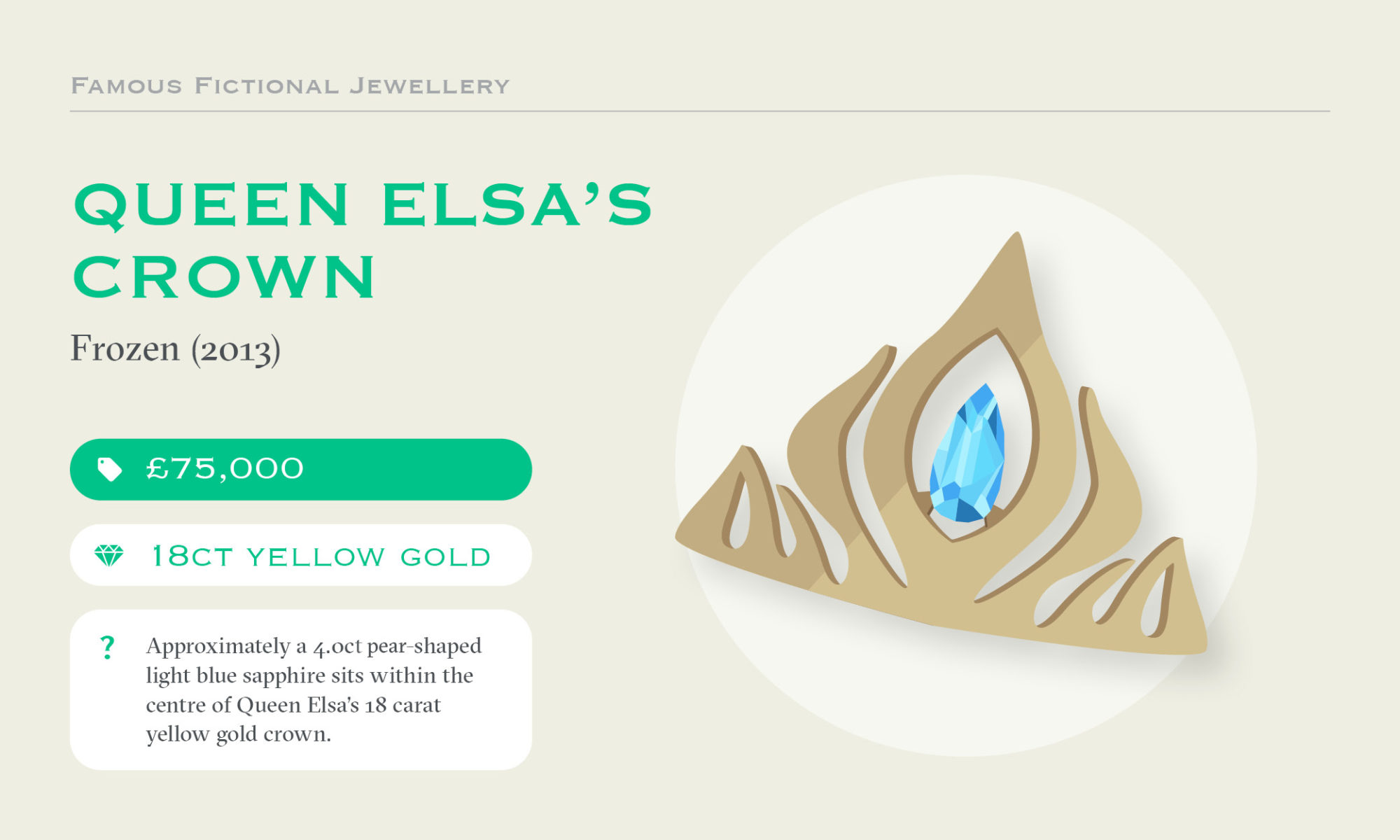 Black Panther features some of the most breathtaking scenery, performances and – of course – costuming in the entire Marvel Cinematic Universe. One of the most show stopping pieces comes in the form of Okoye’s necklace, an 18ct yellow gold body armour choker. Truly fit for a warrior, this piece has an estimated value of £50,000. 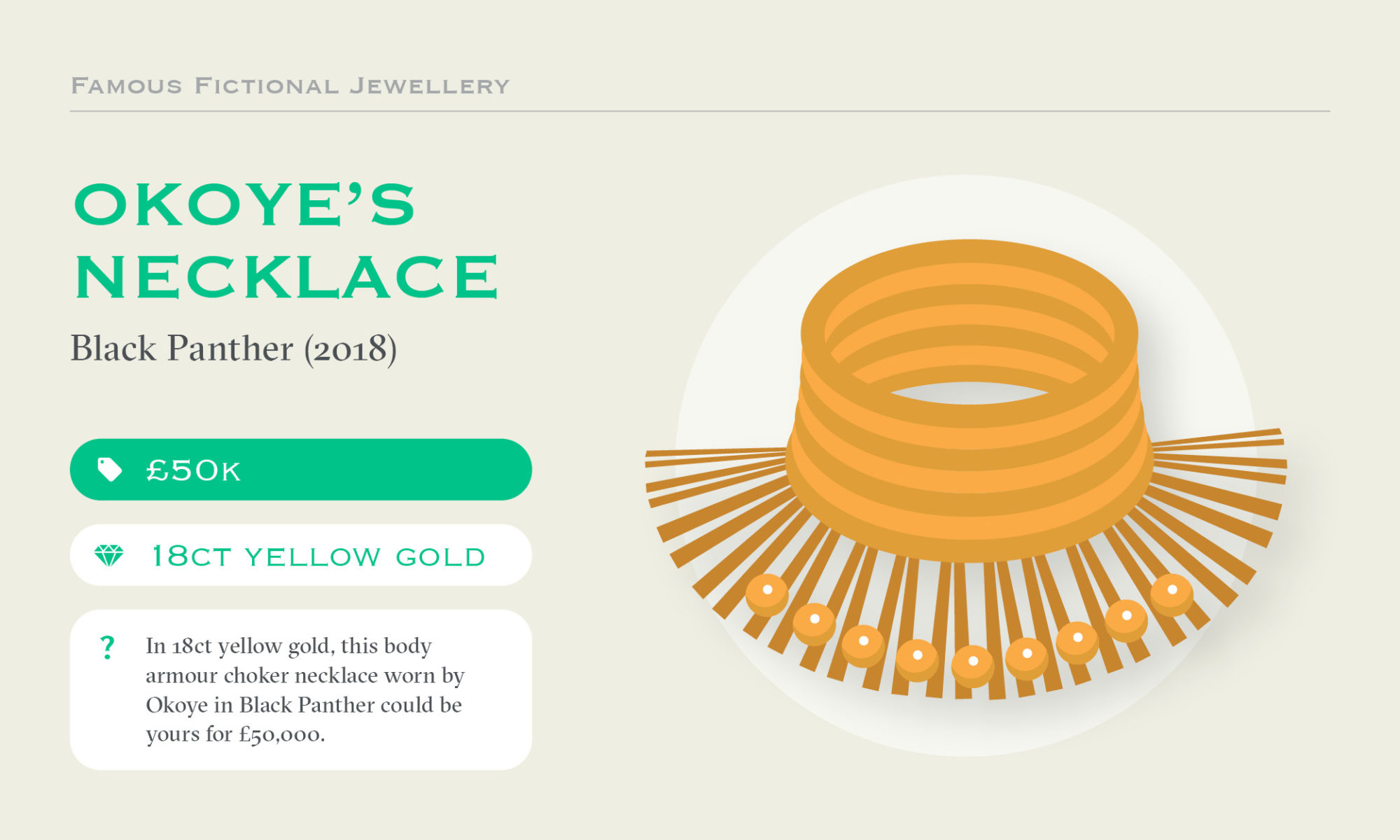 As stated in the Game of Thrones universe, platinum dragons are the rarest of metallic dragons, in fact, most believed that there was only one platinum dragon – so it seems fitting that the Mother of Dragons should have one sat around her neck at all times. Daenerys’ hand-sculpted platinum necklace contains an estimated 200 grams of platinum, making its value £25,000. 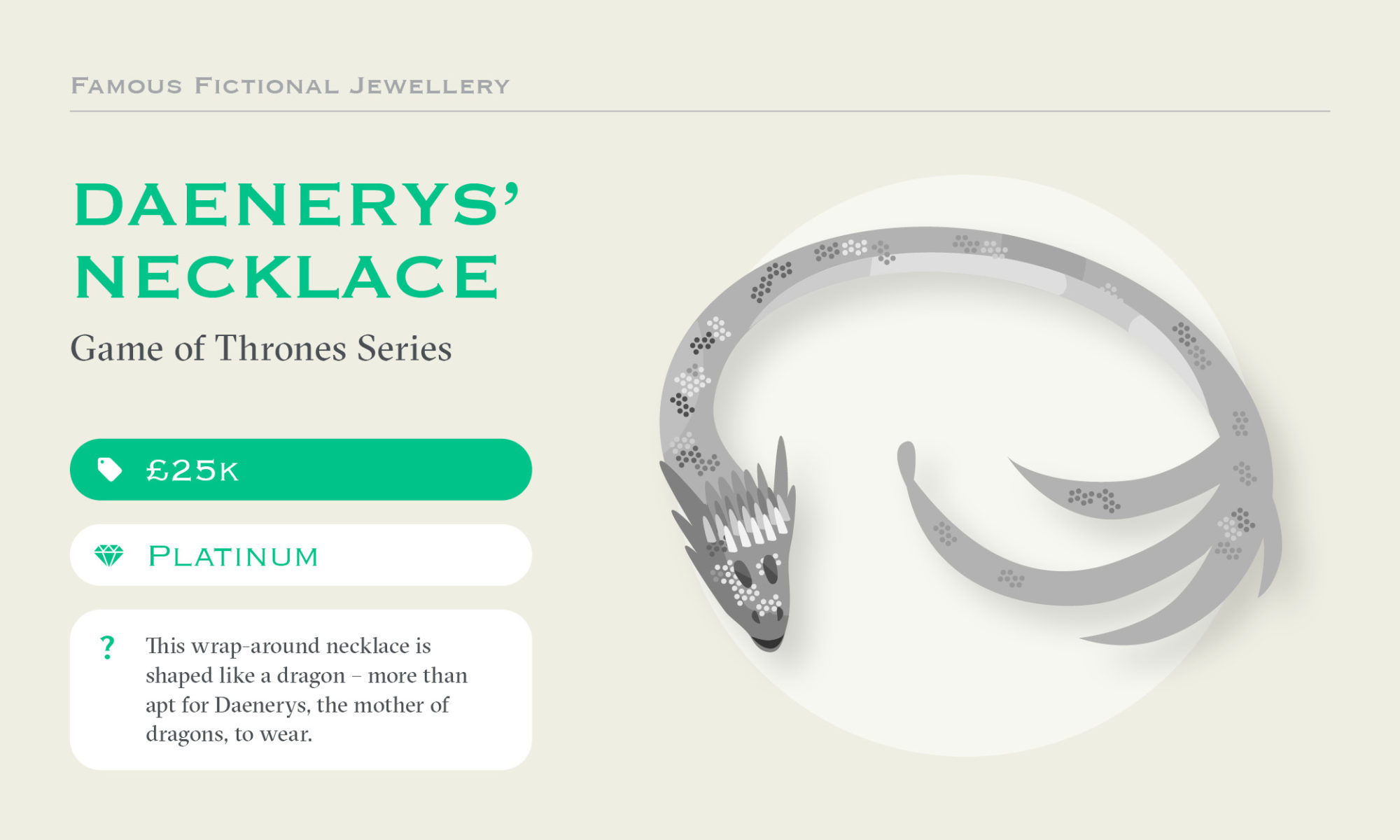 Out of this world jewels

Of course, some of our most-loved pieces possess other-worldly abilities and as such their true value could never exactly be revealed. Whether it’s time travel, enchantment or simply made of materials from another realms, below are the five of the top magical pieces seen on screen.

Jewellery – especially pieces which hold unique properties or abilities- often plays a huge role in the plot of our favourite TV and film, and these are no exception. Featured on this list is Hermione’s Time Turner featured throughout the Harry Potter series, powers aside this 18ct white gold piece would be expected to have a value of around £6,000. 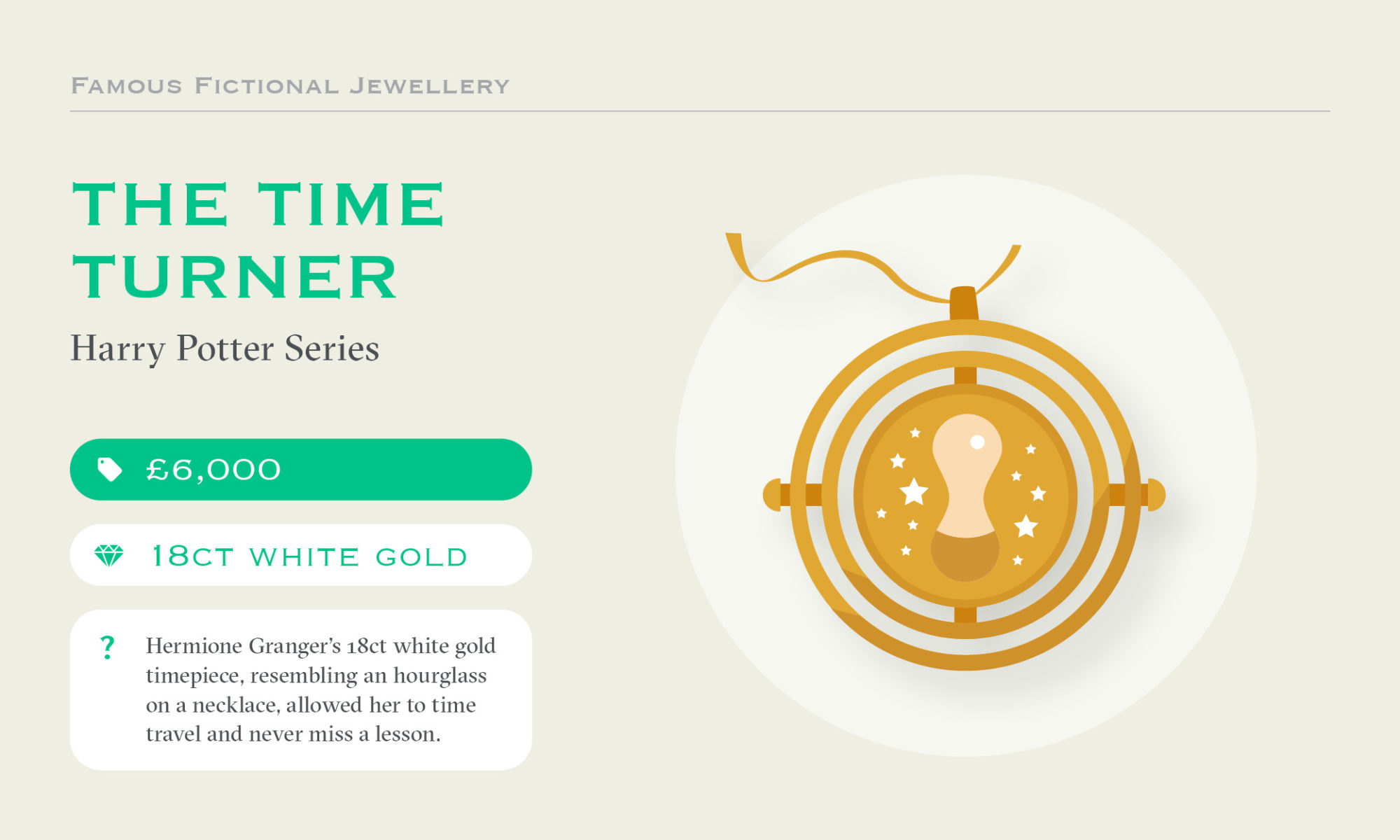 Elsewhere, we see The Amulet of Mara featured in The Elder Scrolls V: Skyrim. This 18ct yellow gold necklace not only reduces the cost of Restoration for players, but can be used for marriage proposals, a perfect alternative for if you don’t know your in-game love’s ring size or preference. Set with turquoise stones, this necklace comes in around £6,000. 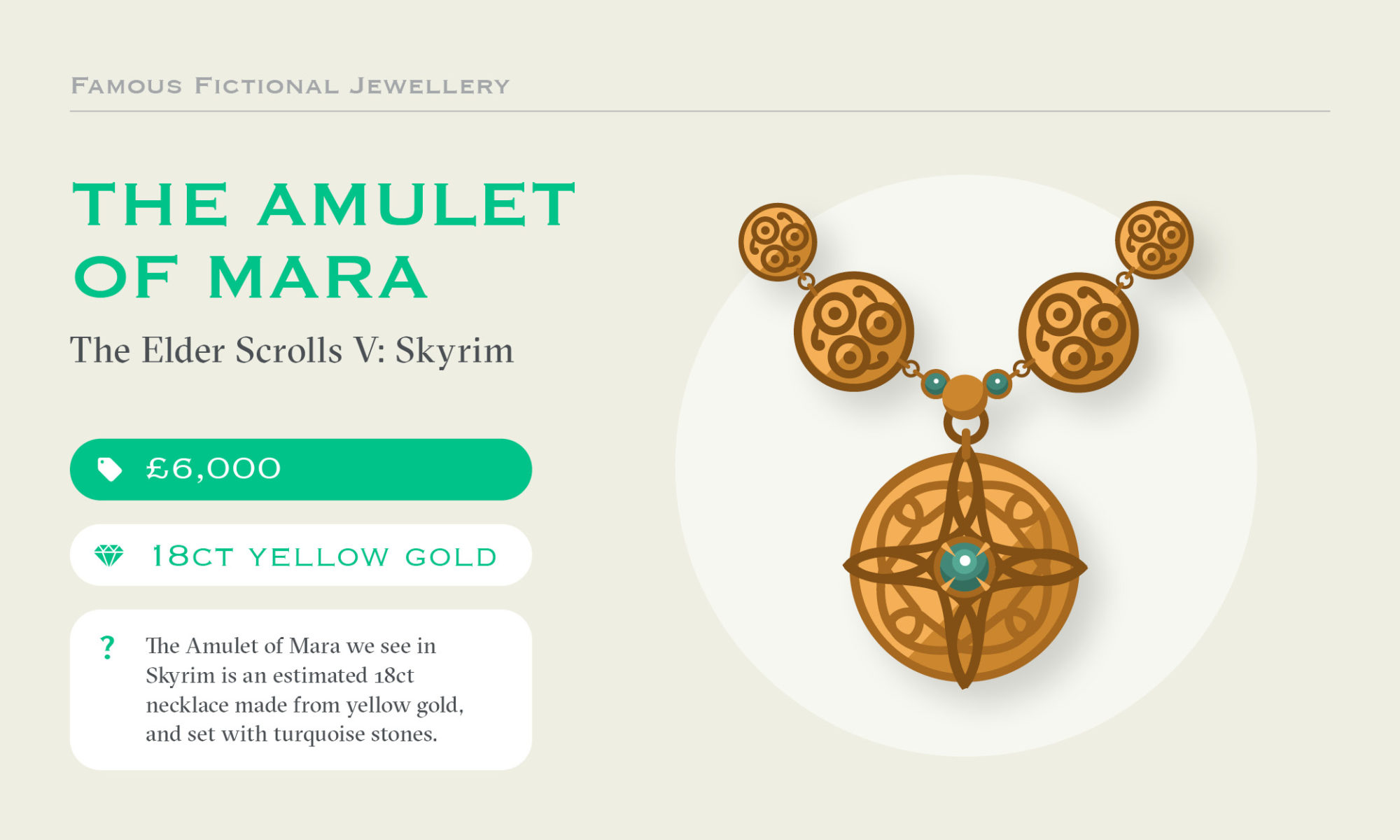 Also featured is the recently-seen Mythosaur necklace from The Mandalorian, which – if you weren’t totally distracted by the ridiculously cute Baby Yoda who had it draped around their neck – is somewhat of a mystery in the StarWars universe. We expect this pendant to come in at around £2,500.

Everyone’s favourite adventurer as seen on TV, in films and in one of the most iconic gaming series of all time, Lara Croft, is seldom seen without her mesmerising emerald pendant. Embodying her spirit of adventure, this necklace was found at Lara’s first archaeological dig alongside her father. 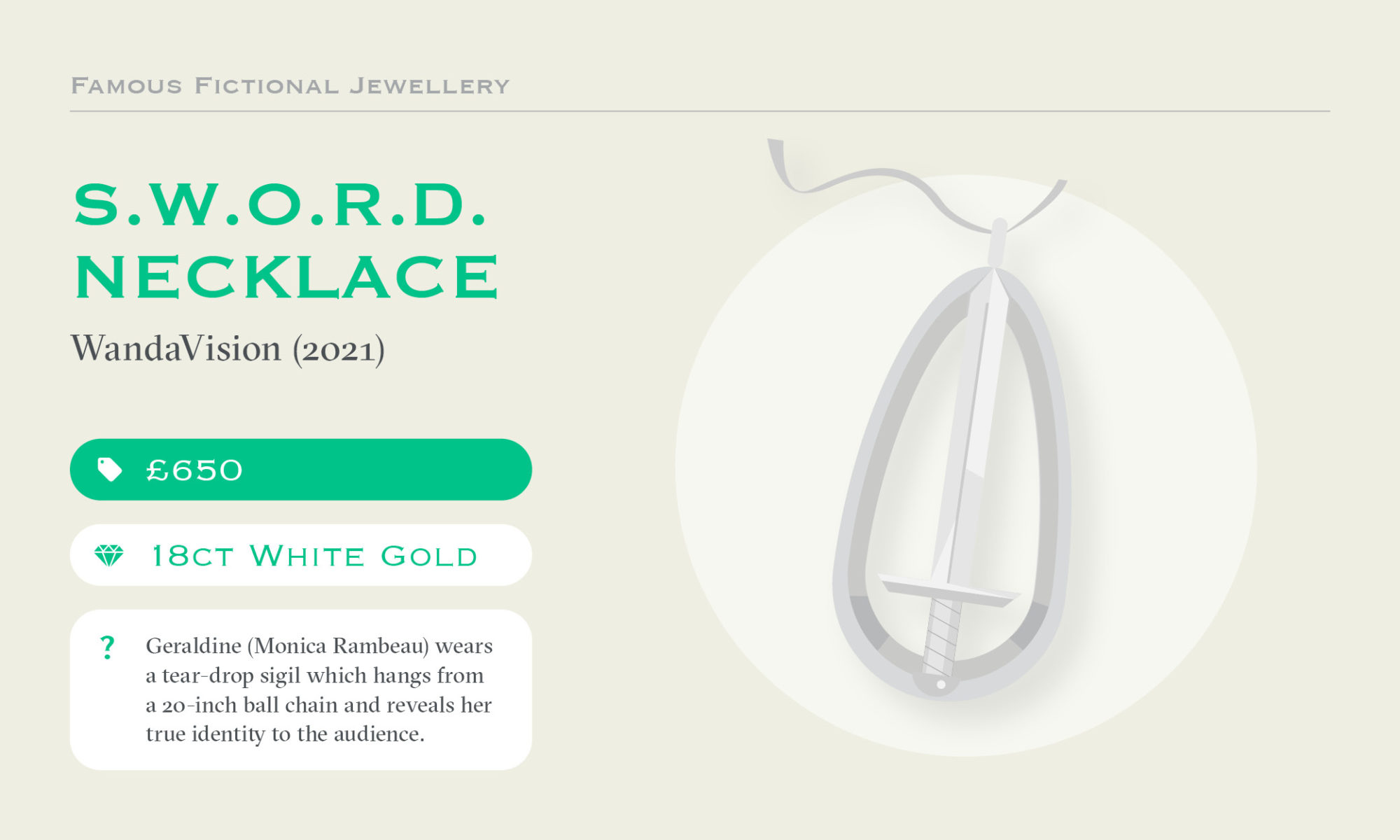 Chances are, you’re currently hearing about a little show called Wandavision currently bringing an air of mystery and intrigue to the Marvel Cinematic Universe on Disney+. In the show, ‘Geraldine’ (later revealed to be Monica Rambeau) wears this 18ct white gold tear-drip sigil, giving a clue of her true identity to eagle eyed fans. Sitting upon a 20-inch ball chain, Monica’s necklace would be expected to be worth around £650 – which isn’t bad to say it started life as a S.W.O.R.D security pass!

All about those iconic rings

What would a look into famous moments in jewellery pop-culture from Taylor & Hart be without a closer look into some of the most dazzling rings to grace our screens!

Rings of all shapes and sizes appear on this list, with Rachel Green’s engagement ring from the infamous accidental proposal in “The One Where Joey Tells Rachel” at the top. The ring, belonging to Ross Geller, is a vintage platinum engagement ring, featuring filigree detail on the tapered band and a halo of large diamonds in the centre, with a total value of £8000. Pam Beesly’s ring from The US Office also makes the list, as her ring from Jim features a 0.50ct oval diamond set in 18ct white gold and a value of £1,735. 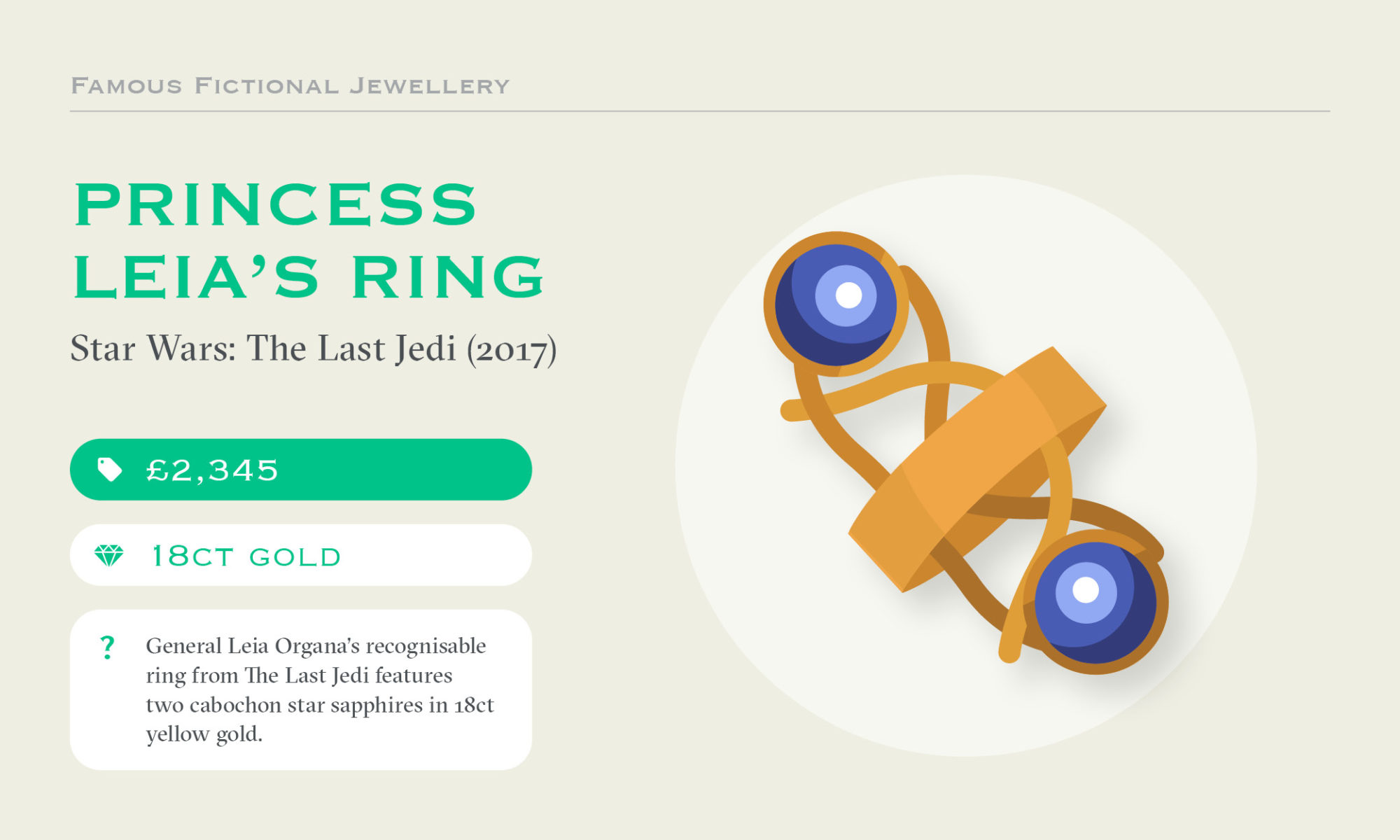 Also featured is The Ultrasonic Ring from James Bond: Die Another Day which features a 5mm band with milgrain and engaged details in platinum (£2,200) and – of course – the One Ring from Lord of the Rings which is an 18ct yellow gold band with custom engraving (£945 – you can’t put a price on magic though!). 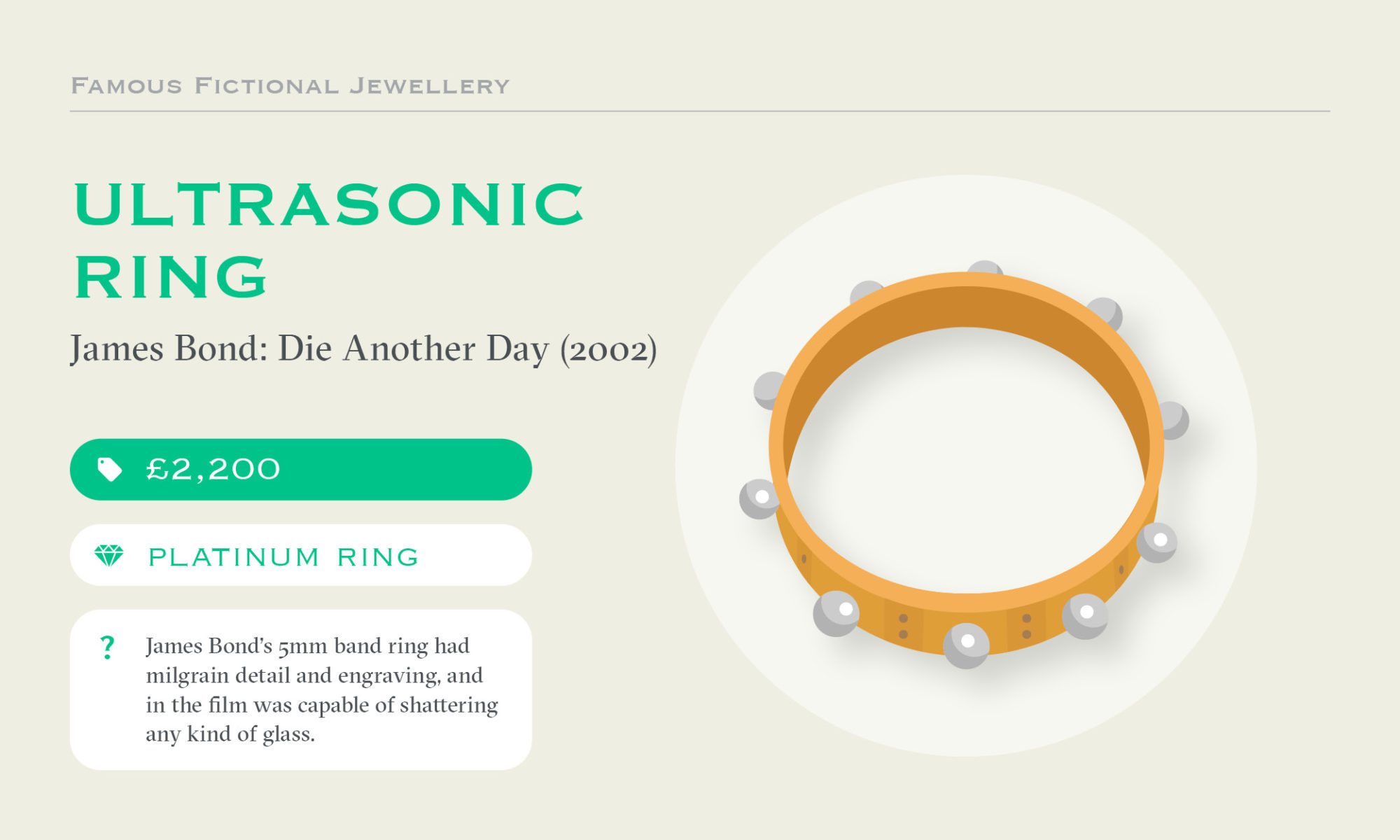 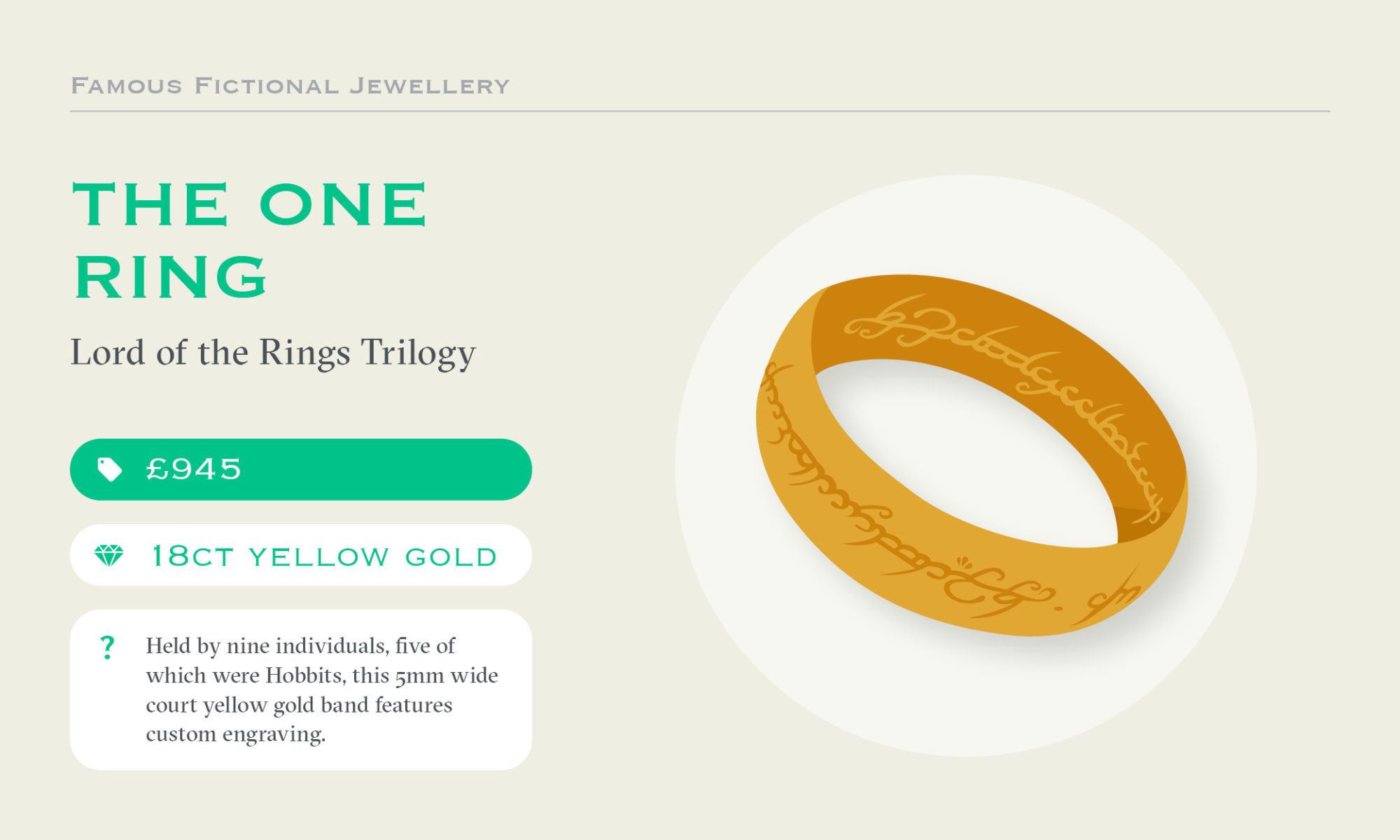 Some jewellery items are synonymous with their wearer and we as an audience can recall immediately when we first saw them and their significance. For some characters it’s their defining piece that stays with them throughout, for others it’s simply part of their iconic look.

A notable mention here is Audrey’s necklace which she wore as Holly Golightly in Breakfast at Tiffany’s, surprisingly, this jewellery is actually revealed to be a costume piece with an estimated cost of around £50. Finally, Eric’s Hedwig and the Angry Inch inspired look from Sex Education sees him donning full drag (and, we might add, looking fabulous) with a pair of drop earrings at an expected cost of around £9.60.

Of course, our screens are flooded with royalty. Rulers of Kingdoms, mighty warriors and heirs to thrones all have their favourite jewellery pieces and we’ve highlighted a few of our favourites below.

Kings and Queens of the screen are expected to don their finest jewellery and these are no exception. From the Zelda saga, Princess Zelda’s is frequently seen in her 18ct yellow gold crown (£18,000). Meanwhile, the reimagining of Aladdin in 2019 saw a Whole New World of jewels when it came to Princess Jasmine, and her sapphire and turquoise necklace (£15,000) worn for the first half of the film is a showstopper. 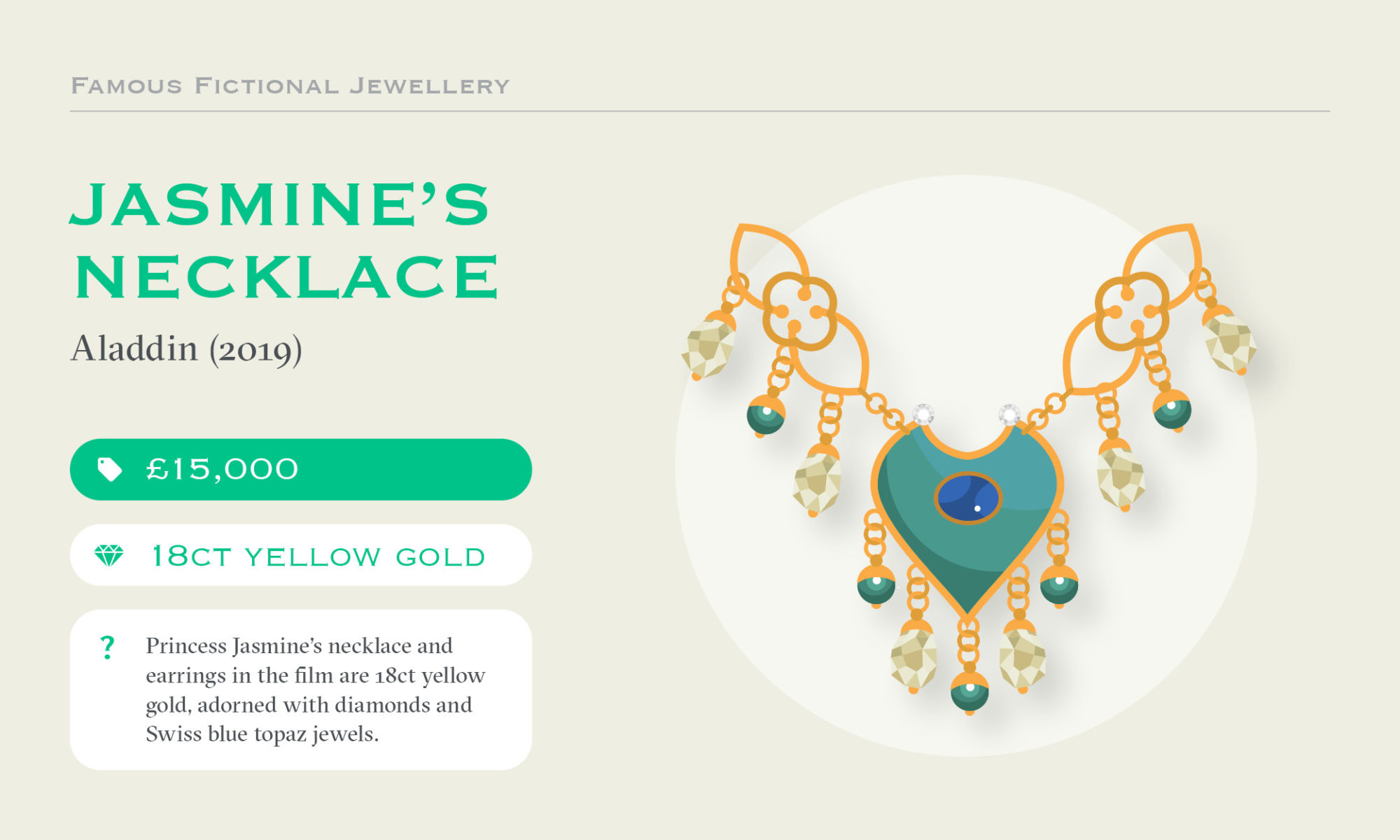 Seen something you love?

So next time you spot something on-screen and wonder if it’s possible to weave into your happily ever after, why not see what you can create? We offer bespoke commissions, welcoming requests from all fandoms, realms and planets and take a limitless approach to creating the perfect one-of-a-kind ring to tell your unique love story. We make love our life’s work, so together let’s make your wedding dreams come true.

create your own design