Round solitaire with six eagle claws set in platinum

When shopping for your diamond ring, there are a plethora of elements to consider from metal type, band style, diamond shape, band width as well as diamond size and quality. However, the design elements that ring true for all of our collection rings is that every classic design looks beautiful from every angle and is comfortable to wear. The collection transcends trends and are destined to become treasured family heirlooms.

Mid-century modern design is sleek, yet always functional. That’s what we wanted for the collection.

Understanding the anatomy of an engagement ring will help to describe and recognise the different elements of a ring’s design and how you might like to customise it to suit your preferences. For collection designs that allow it, these rings are set with a small signature ruby on the inside of the band. The red ruby acts as a tangible symbol of our brand, capturing both our customers’ story and the care everyone at Taylor & Hart has put into the design, craft and delivery of each product. It’s also a sweet chance to personalise your ring-the ruby can be replaced with a gemstone that has special meaning to you or your partner. 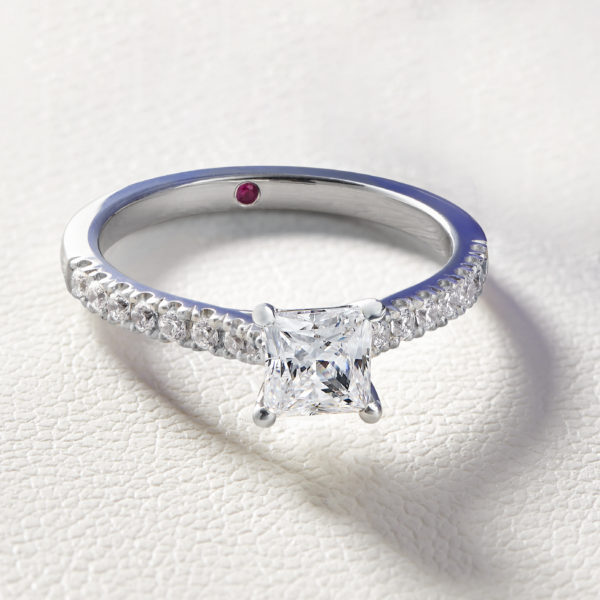 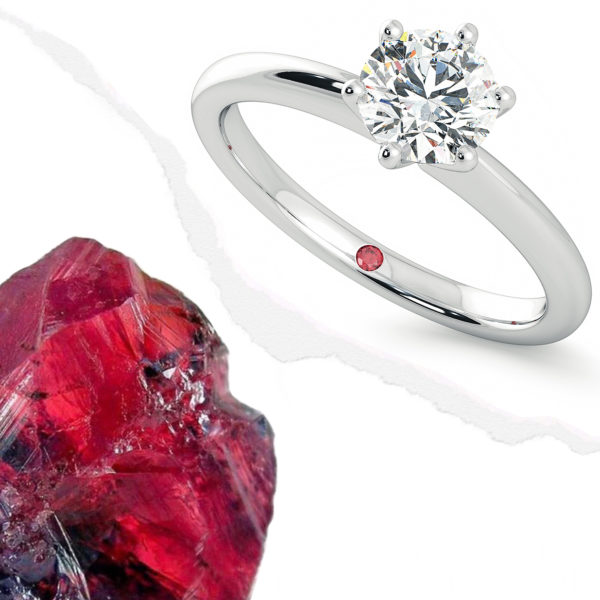 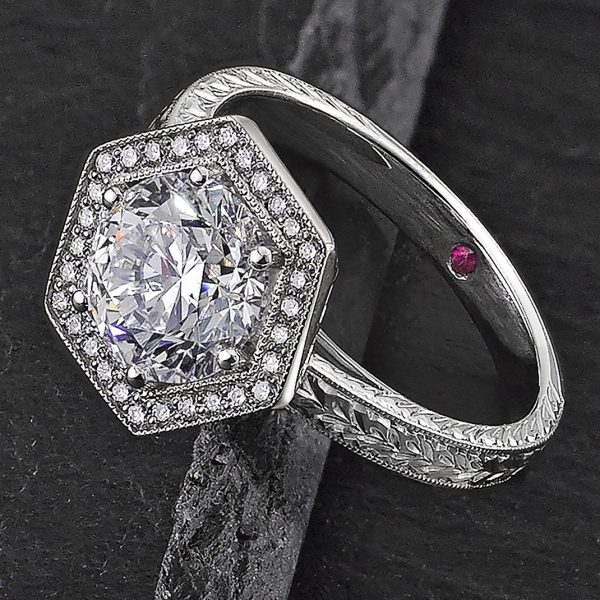 Solitaire rings feature a centre stone held in place by claws or a bezel setting with a plain metal band. The style is an icon of proposal culture, making up 70% of the engagement ring market. Known for their simplicity and striking appearance, solitaires let their centre stone take centre stage.

This heavenly style features a ring, or ‘halo’, of closely set smaller diamonds that surround the centre gemstone. This engagement ring style cleverly gives the illusion that your centre gemstone is larger than it is, with a sparkly finish that captures attention.

Deriving from the French word for paving stones, this style typically features a centre gemstone with a band that is paved with small stones, set closely together. Each stone is separated and held in place by individual microscopic metal settings, giving the appearance of the shoulders being dusted with diamonds.

Often known as trinity or three stone engagement rings, trilogy rings feature just that-three gemstones or diamonds, each one symbolising the past, present and future. The trilogy most frequently sees a larger centre stone, with slightly smaller stones flanking either side. Typically, the side stones are around one third of the centre gemstone’s size, but the size is totally up to the wearer-use very small side stones to accentuate the centre stone or three equally sized stones to give a fuller coverage on the finger. 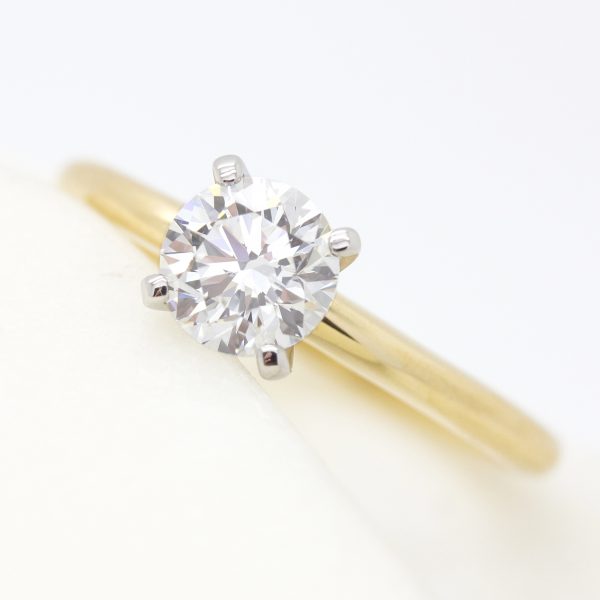 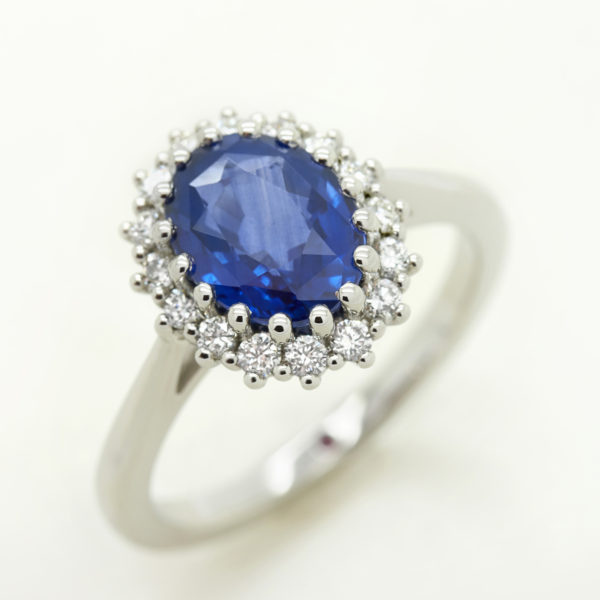 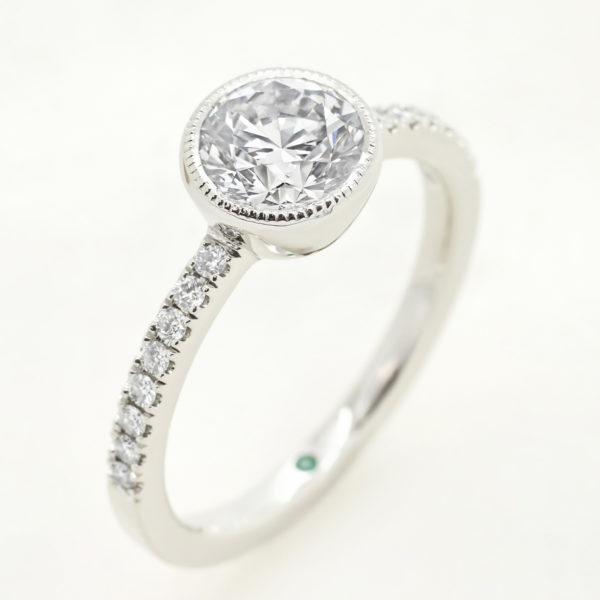 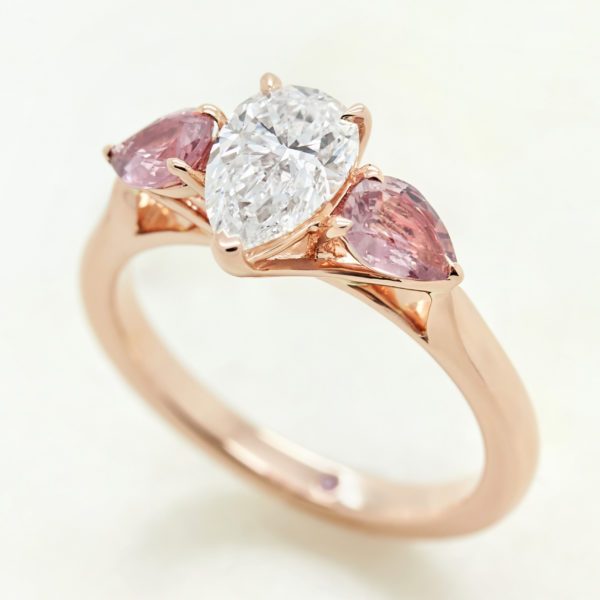 Platinum-known for its beautiful, cool white sheen that is the perfect backdrop for your diamond or gemstone. This metal requires a low level of maintenance, with almost 60% of our customers opting for platinum rings.

Synonymous with warmth, rose gold is a delicate and pretty metal choice and notably looks excellent on all skin tones. Rose gold rings are the second most popular choice amongst our customers. 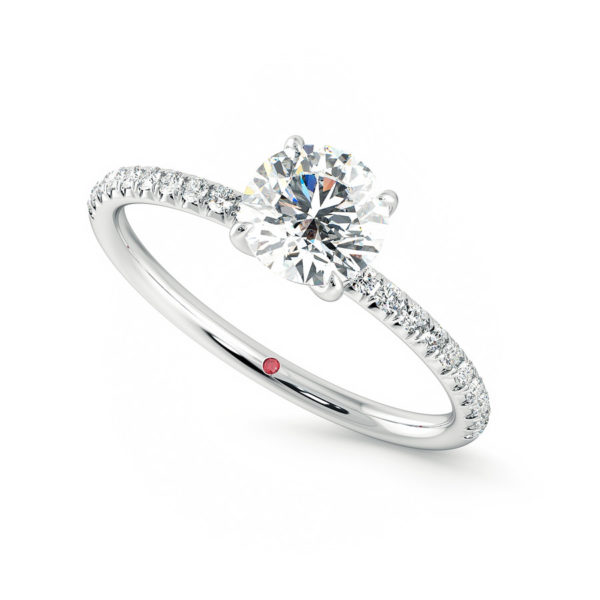 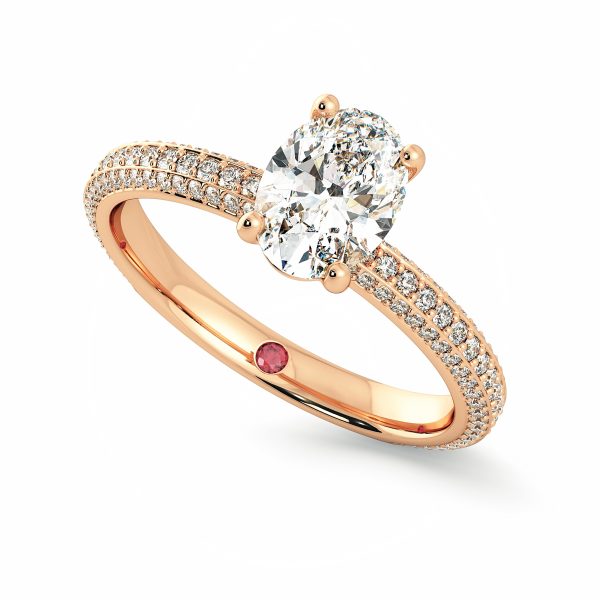 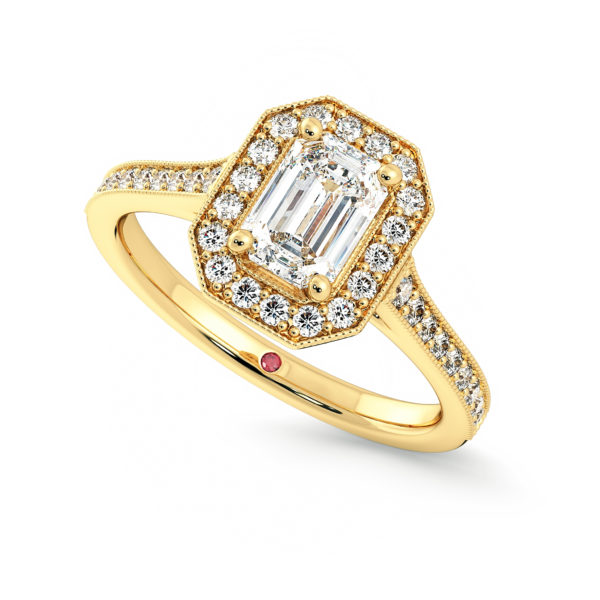 We source diamonds globally from diamond manufacturers that comply with the United Nations Kimberley Process in order to affirm all of our diamonds are ethically sourced. To learn more about the different sources of diamonds, from lab-grown diamonds to CanadaMark, visit our ethical engagement ring page. 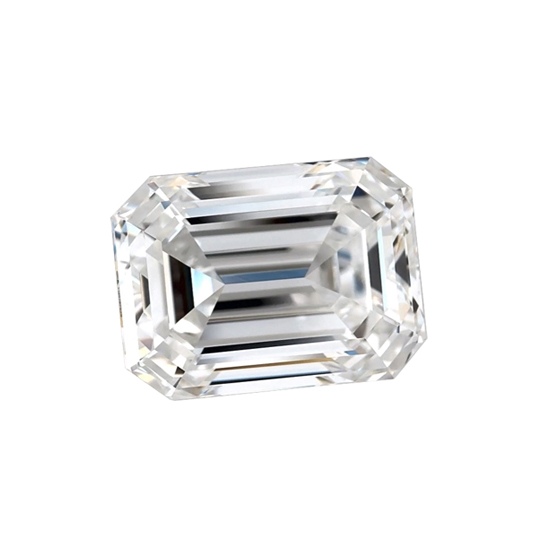 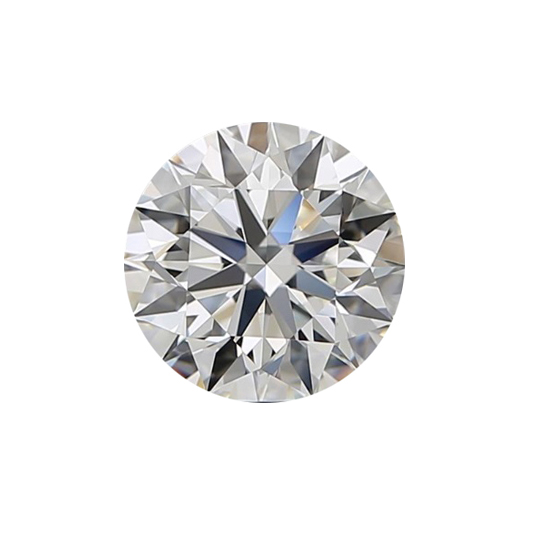 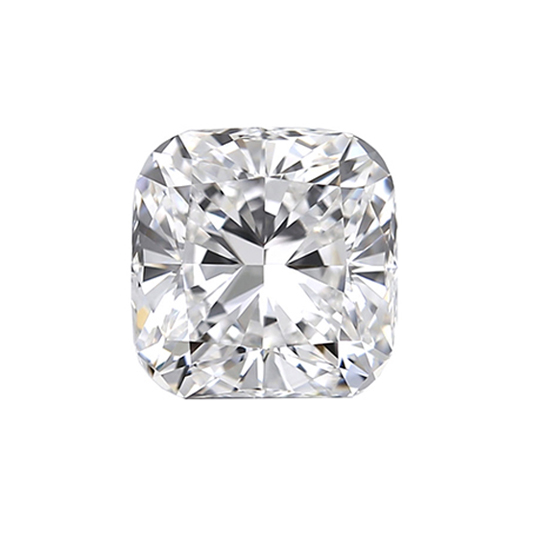 There are plenty of myths surrounding how much you should spend on a diamond engagement ring-we’re sure you’ve heard of the three month’s salary rule, the one month salary rule or even the split-the-difference rule.

The US spends the most on engagement rings, with an average spend of $6,351 in 2017. While the average spend is significantly less in the UK, it doesn’t mean people are buying inexpensive rings. Instead, we’ve seen a trend that has seen consumers move away from traditional choices, choosing to explore different designs, materials and styles as well as gaining a deeper understanding of a product’s value before deciding what to spend on an engagement ring.

In summary, spend as much or as little as you are able to because no one should put a value on your love-it’s priceless.

Engagement rings are so special because they’re more than just a jewellery purchase. They’re a tangible mark of the intention to get married, while a wedding ring symbolises the union. We understand how sentimentally valuable an engagement is and we love that this symbol of commitment can be so personal to each couple.

You’ve decided to pop the question and take the first step to spending the rest of your life together, but what ring size is my partner?! We have some invaluable advice for choosing that perfect ring available on our ring size guide – even if you’re planning a surprise proposal. 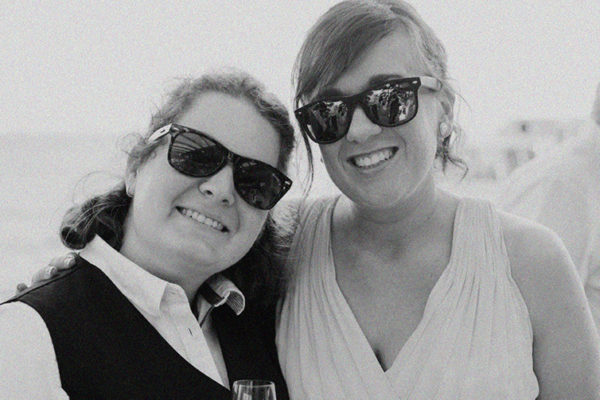 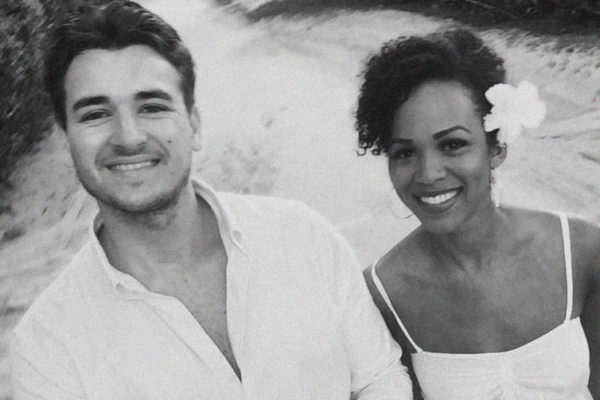 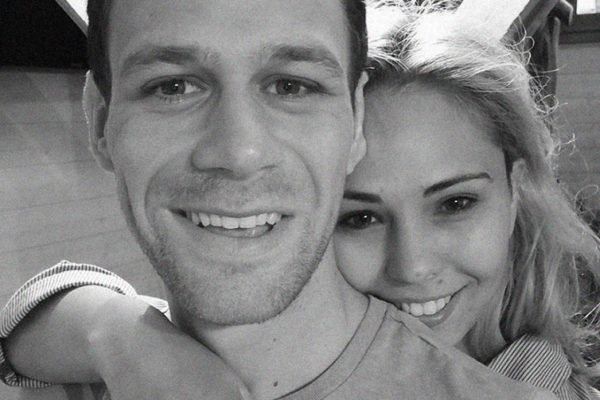 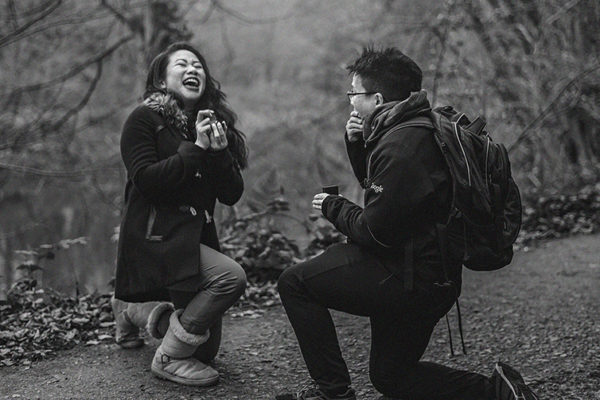 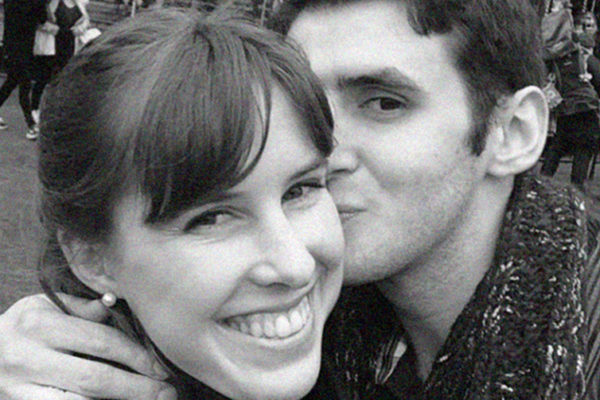 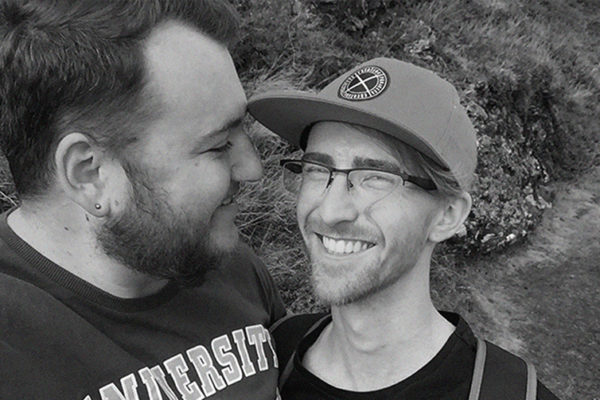 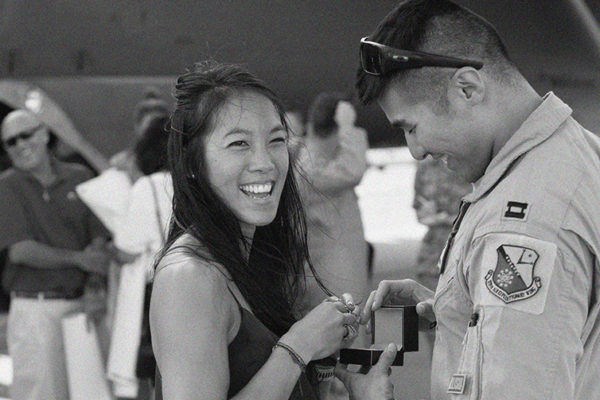 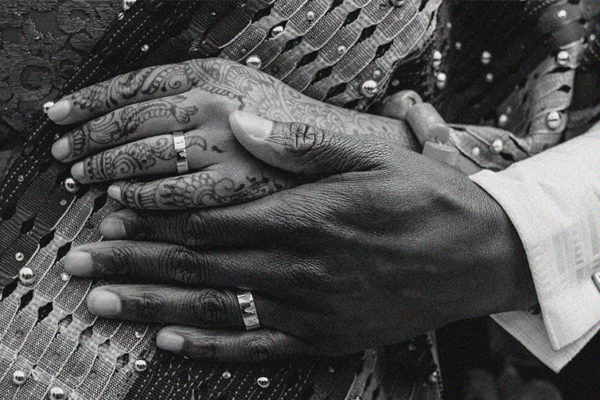 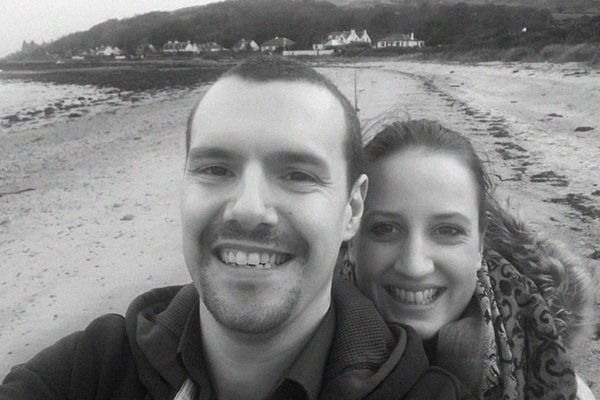 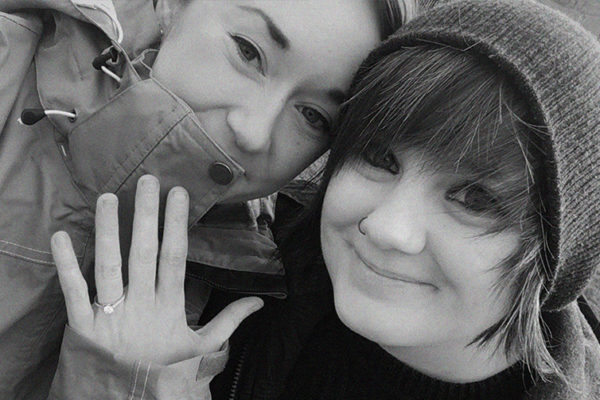 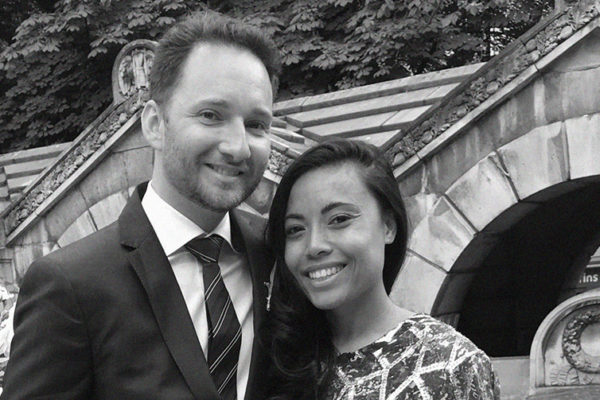 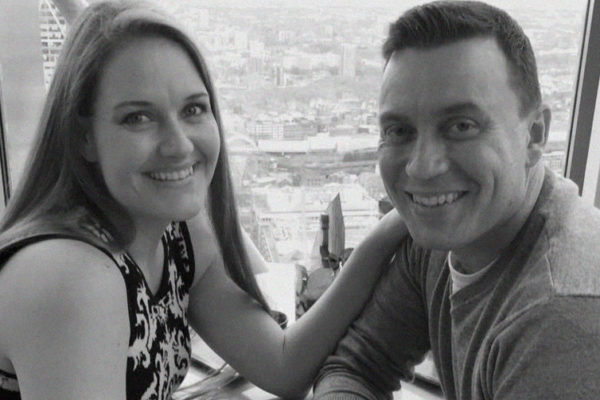 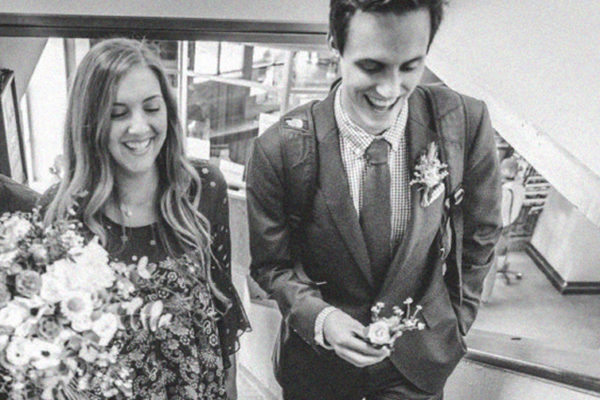 Whether we’re personally guiding you through our custom design process or helping you choose one of our classic designs to make your own – we’ll ensure you make the perfect choice.

We specialise in designing unique engagement rings and wedding bands for both women and men. We are changing the way people shop for bespoke jewellery, wedding rings and engagement rings in London as we believe in providing a simplified and advisory shopping experience, led by your requirements. As a winner in the ‘Best Jeweller’ category in the National Association of Jewellers (NAJ) Awards, we continue to refine the way people shop for engagement rings in the UK at our London showrooms. Our City showroom is located just a short tube journey away from London’s Hatton Garden, near Monument and Bank tube stations while our Mayfair showroom is just one minute walk from Bond street tube station.

To live up to our “Best Jeweller” award, we work with you, on your terms throughout all stages of the process to ensure that your ring is designed with your needs and ideas in mind. We offer advice and guidance throughout the whole process from design tips to discussing the cost of engagement rings. By merging an inspired design with a seamless service, Taylor & Hart will guide you through the process of creating a bespoke engagement ring or wedding band for ladies and gentlemen alike. Crafted to last a lifetime.

We use Gemological Institute of America (GIA) graded diamonds to ensure your jewellery piece is crafted from ethically sourced diamonds, gemstones and precious metals of the highest quality. Selling a classic collection of the best engagement rings, hand finished in London, UK, our rings are created to be admired for decades to come.

We offer a complimentary re-sizing service to our UK customers to ensure the perfect fit as well as a 90 day returns policy for your peace of mind. We understand that choosing a ring isn’t an easy process, so we are committed to providing you with a remarkable service as well as a ring that captures your unique love story.