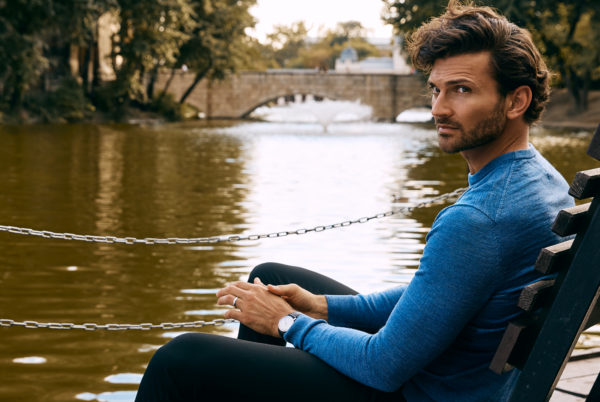 Shy of the proposal itself, choosing the perfect engagement ring design comes as the ultimate way to express your love for your partner. Being able to capture your unique love story in the form of a precious ring is one of the greatest romantic gestures in life, and with any luck it’s something we’ll all get to experience in our life. 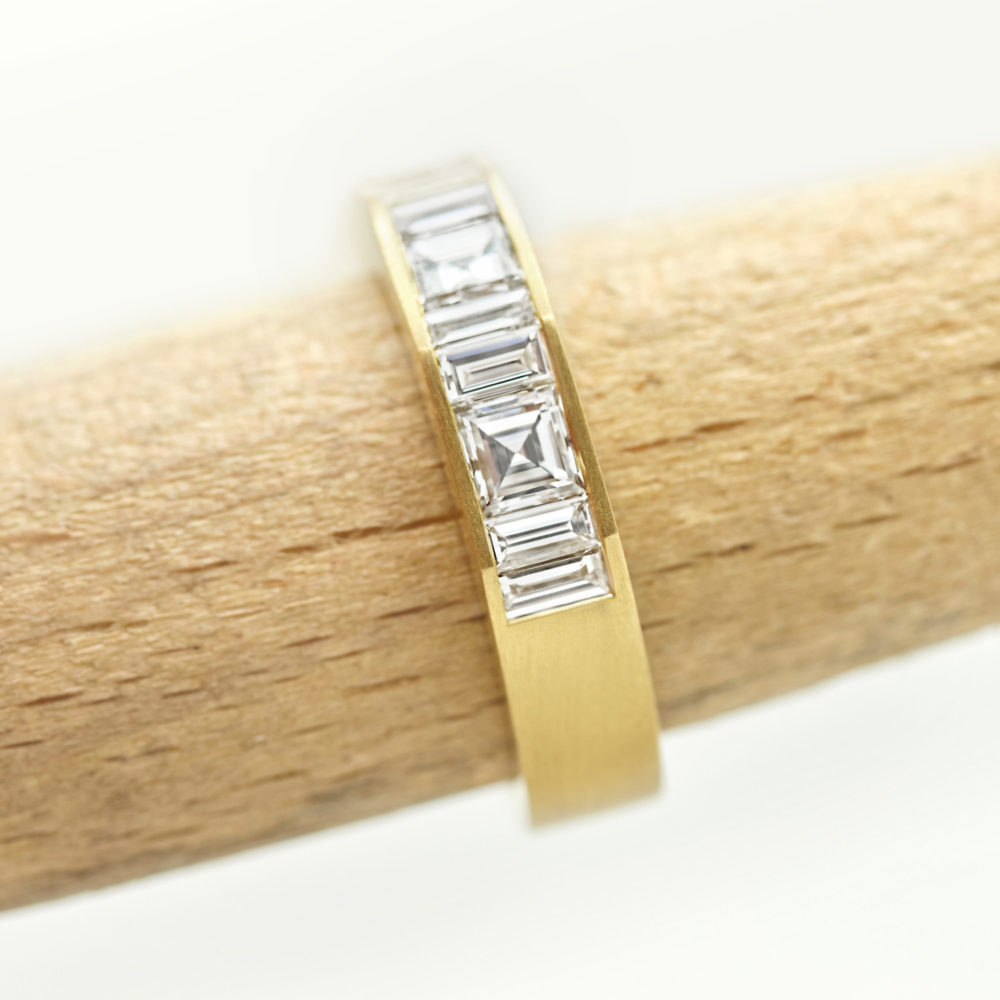 Designing a ring to mark your lifelong commitment to the person you love most in the world sounds like a pretty universally wonderful thing, doesn’t it? While we sure think so, for most of history, engagement rings have brought with them gendered expectations of who should do the sourcing and who should do the receiving. But things are changing, for the better. 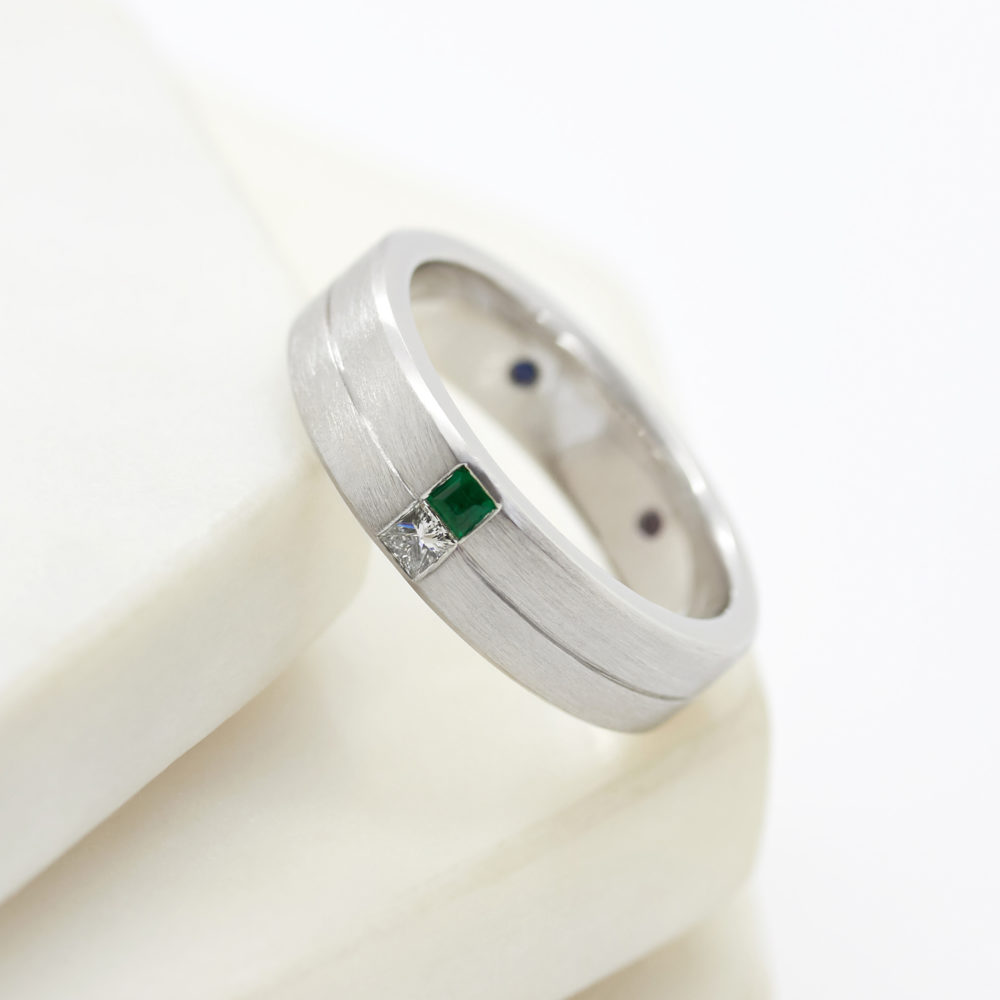 Engagement rings for men are becoming the new normal, meaning that absolutely everyone can have this deeply meaningful token of love to treasure for the rest of their lives.

For those who are unfamiliar to those who have already begun planning their proposal to the man of their dreams, we’ve put together a guide to the wonderful world of men’s engagement rings to help you find the perfect ring.

Interest in men’s engagement rings is spiking, including among celebs

One modern notion that needs to be retired ASAP is the idea that jewellery and gemstones are reserved for women. In virtually every civilisation up until now, men have worn ornate jewellery to honour their family lineage, to convey respect, and to otherwise look dashing on the day-to-day.

So thank goodness for the fact that men’s jewellery has seen a surge in popularity recently: from Harry Styles’s internet-breaking pearl necklaces, to the emergent trend of men’s engagement rings. Far from being a loud statement piece, men’s engagement rings are an understated display of masculine devotion and love.

Brooklyn Beckham is up on the trend, wearing an engagement ring that features a 0.5ct baguette diamond gypsy set in an 18ct yellow gold band. He proposed to his girlfriend Nicola Anne Peltz before getting his ring, and while they aren’t married yet, his engagement ring is a taste of what is to come! 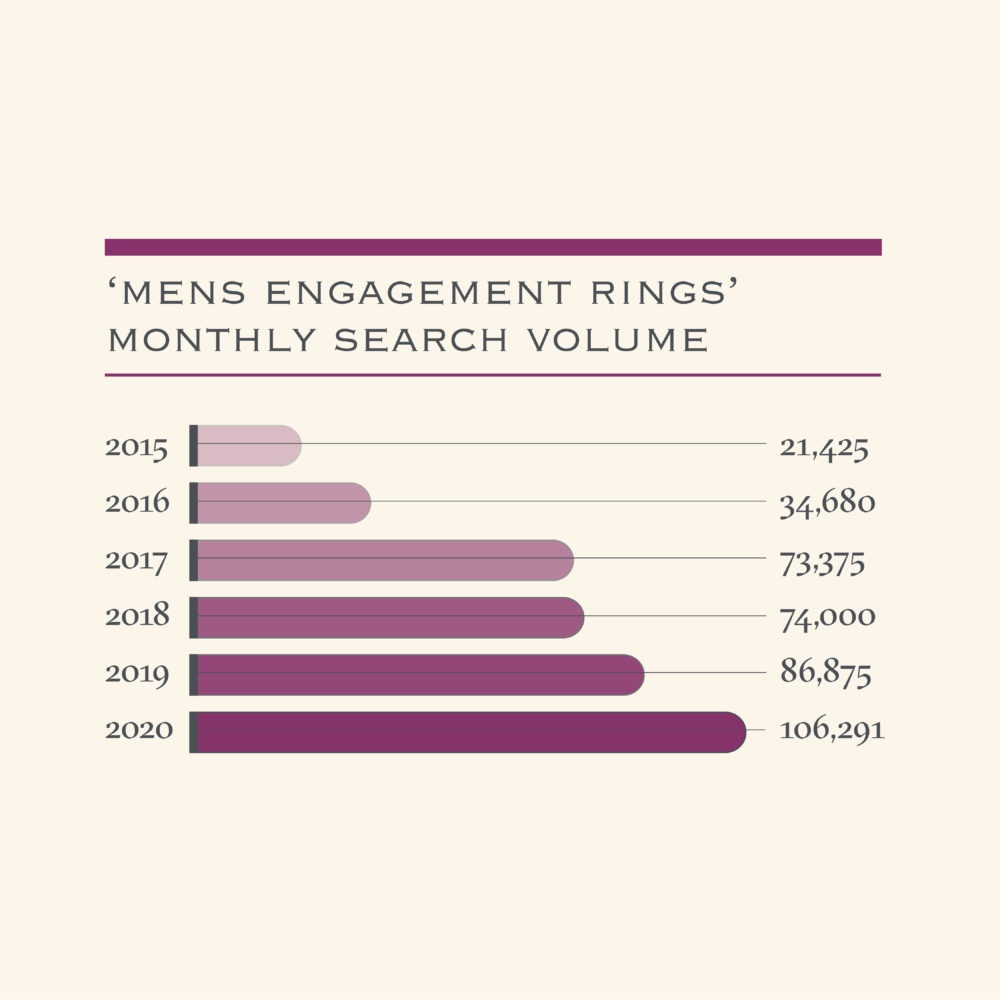 The history of men’s engagement rings

While engagement rings have traditionally been reserved for women, there’s no reason why men shouldn’t compliment their wedding bands with something expressive and personal, too. Beyond being a mere signifier for a man’s marital status, an artisan-crafted ring can bring out the best of masculine creativity and artistry.

The practice of wearing engagement rings can be traced back to ancient Rome, where women wore rings made out of gold, ivory, flint or copper to signify their marital status and commitment, while men were not obliged to wear a ring.

The tradition of a man wearing a wedding band came about in World War II, when men began wearing wedding rings to remember their loved one while overseas. When the war ended, wedding and engagement rings became symbols of prosperity and success, with weddings becoming a much more lavish celebration compared to the traditional religious and civil ceremonies of yore.

Today, a vast majority of men wear wedding bands to act as a symbol of commitment and a celebration of their marriage. While timeless, men’s wedding bands are often very simple and traditional. But things are changing. And we’re here for it. 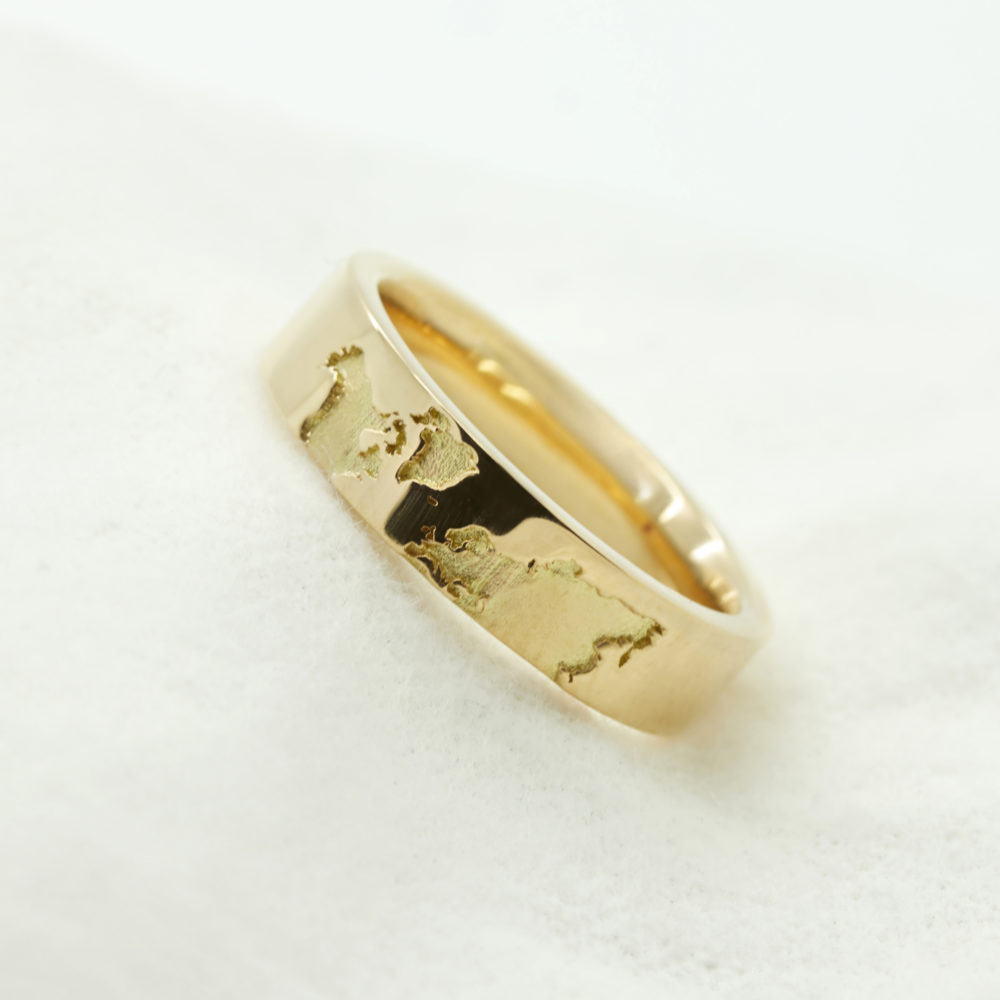 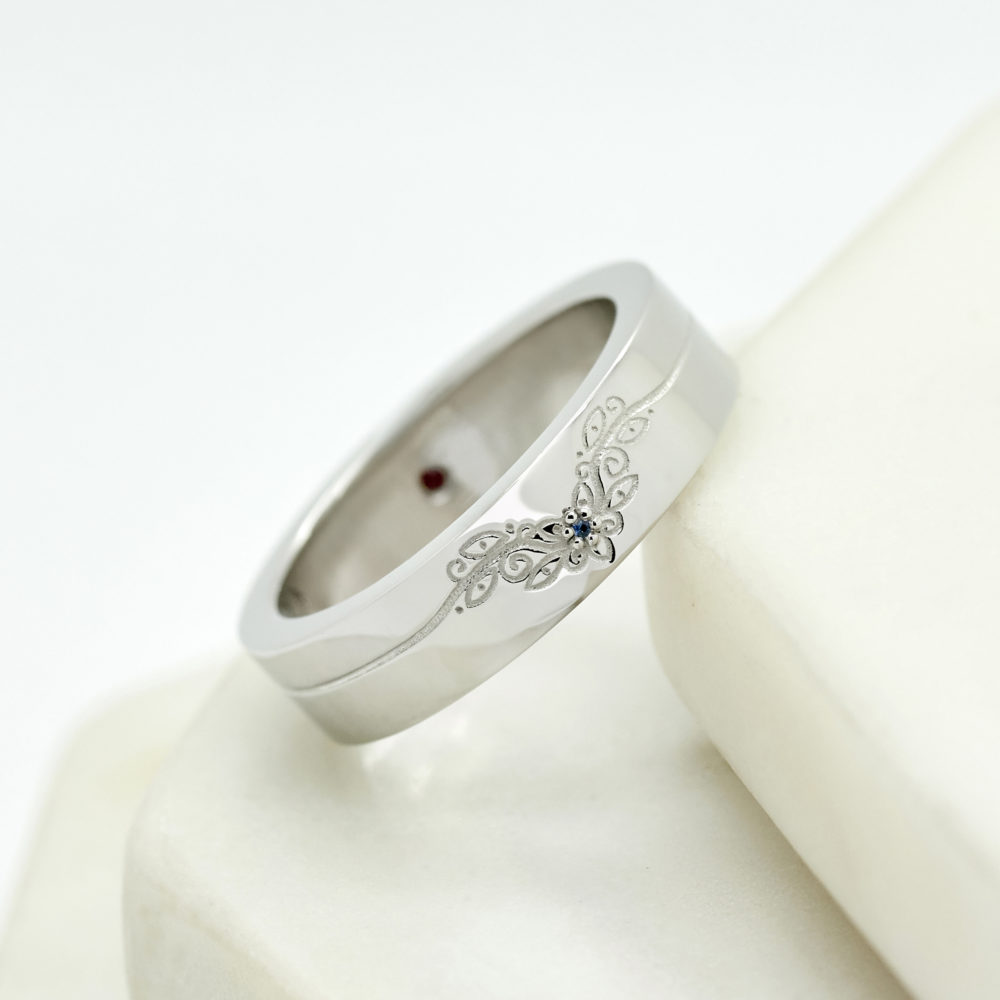 Finding him the perfect ring: Adam and Will’s story

We’ve helped plenty of folks design a dream ring for their soon-to-be fiancé, something we’re always happy to help with considering the barriers that still exist for men looking for engagement rings.

Take Adam and Will. These two knew that they had found the one almost instantly after having been introduced by a mutual friend years ago. Marriage seemed like a natural next step, but finding the right rings didn’t come so effortlessly.

‘I shopped around but a lot of engagement rings are quite dainty and feminine and I wanted something a bit more masculine,’ Will told us, adding that because the engagement ring market is so geared toward women, ‘all masculine rings seem to be [designed in] the same way, which means a lot of men aren’t really that interested.’ 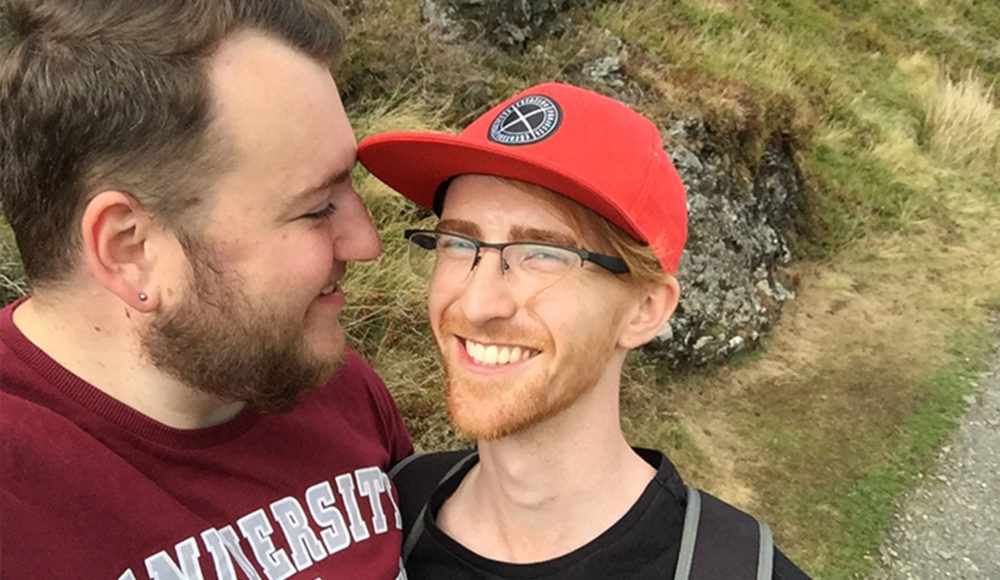 But Adam was determined to create a piece that would speak to his deep, eternal love for his then-boyfriend.

‘We shopped around a bit, and what we liked about Taylor & Hart is that the rings are completely customisable, you can design what you want,’ Adam told us. He chose an emerald centre stone because green is Will’s favourite colour. ‘I came up with a basic design after that and Kate was fantastic,’ he explained, ‘and she brought the ring to life and made exactly what I had pictured, it was great.’

‘It was perfect. It was really expressive, as well. Anyone who saw the ring would say, that was made for you. And it was!’ — Will

It’s been couples like Will and Adam who have taught us that love knows no gender, it doesn’t pick and choose, it comes to us all naturally. As such, the jewellery we use to mark our jewellery shouldn’t conform to any set standards; it should simply express who we are and how we love. 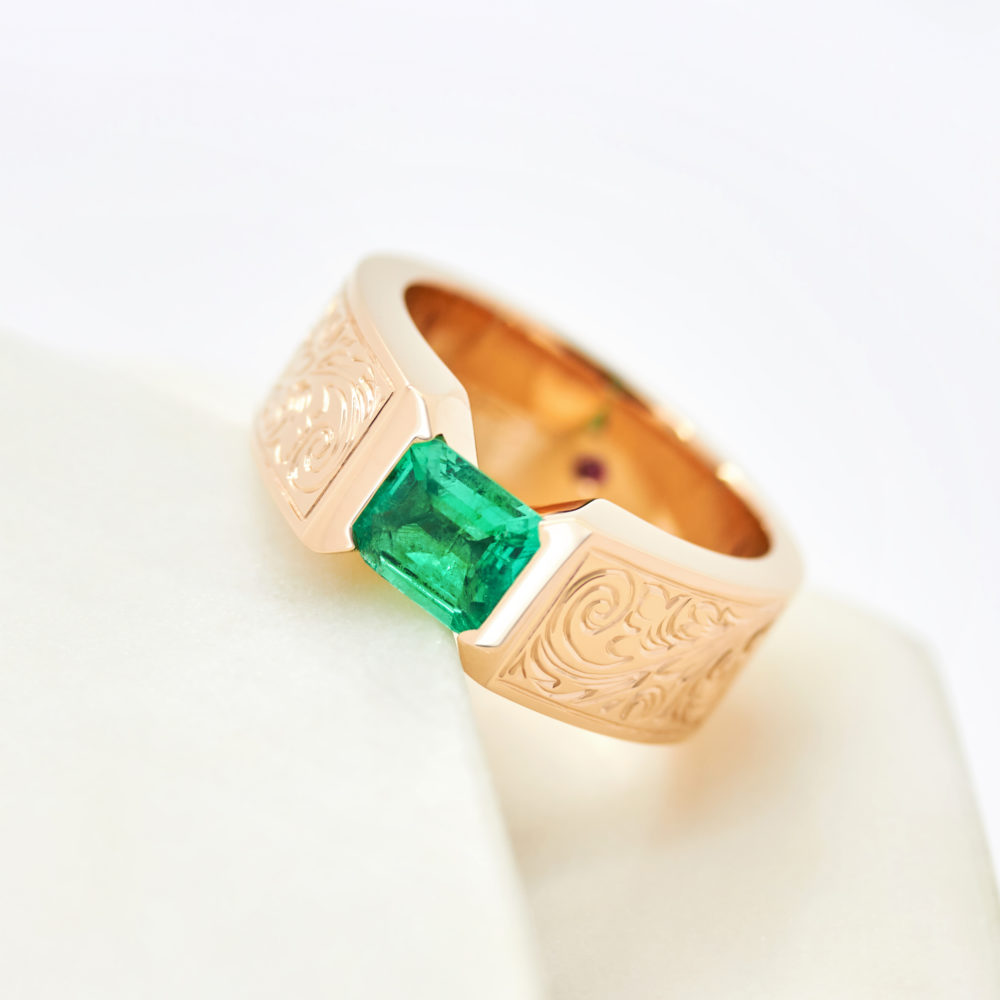 What is the difference between a men's engagement ring and a men's wedding ring?

Symbolically, a man’s wedding ring is first worn on the day of his wedding to mark the beginning of his new relationship. Both he and his partner put on their bands in an act of reciprocal recognition of their marriage, to bond them together as a loving couple.

Conversely, an engagement ring is worn from the time one partner proposes marriage, as a symbol of intent and excitement for the actual forthcoming marriage. Historically, women are asked to wear an engagement ring, which will be more intricate and stylised than her wedding ring. The same goes for men’s engagement rings!

These rings serve the same cultural purpose, only with a more masculine flair to their design. This collection celebrates the innate stylishness of minimalism, with sleek bands, accented gemstones, and thoughtful engravings.

What matters most when it comes to a men's engagement ring?

Designing an engagement ring worn by a man is all about channelling his unique style into a piece of fine jewellery. We always encourage people to think outside the box and be brave when it comes to choosing which design elements to incorporate. From a dazzling centre stone—white diamonds, black diamonds, and sapphires always make a good choice—to a hand engraved message along the band, the options are limitless.

Recently we’ve seen an uptick in interest for rings that feature a channel set row of melee diamonds that wrap around the band (like the ring pictured here!). Also, mixing it up when it comes to the finish of your metal—including brushed, polished, or pebbled—and the colour of metal you choose is always exciting.

But the main piece of advice we give to people is to follow your instincts. When you find the love of your life, your heart and your head shout ‘yes’. You get that feeling. You just know. The same goes for picking the perfect ring. When the design is just right, you’ll know. 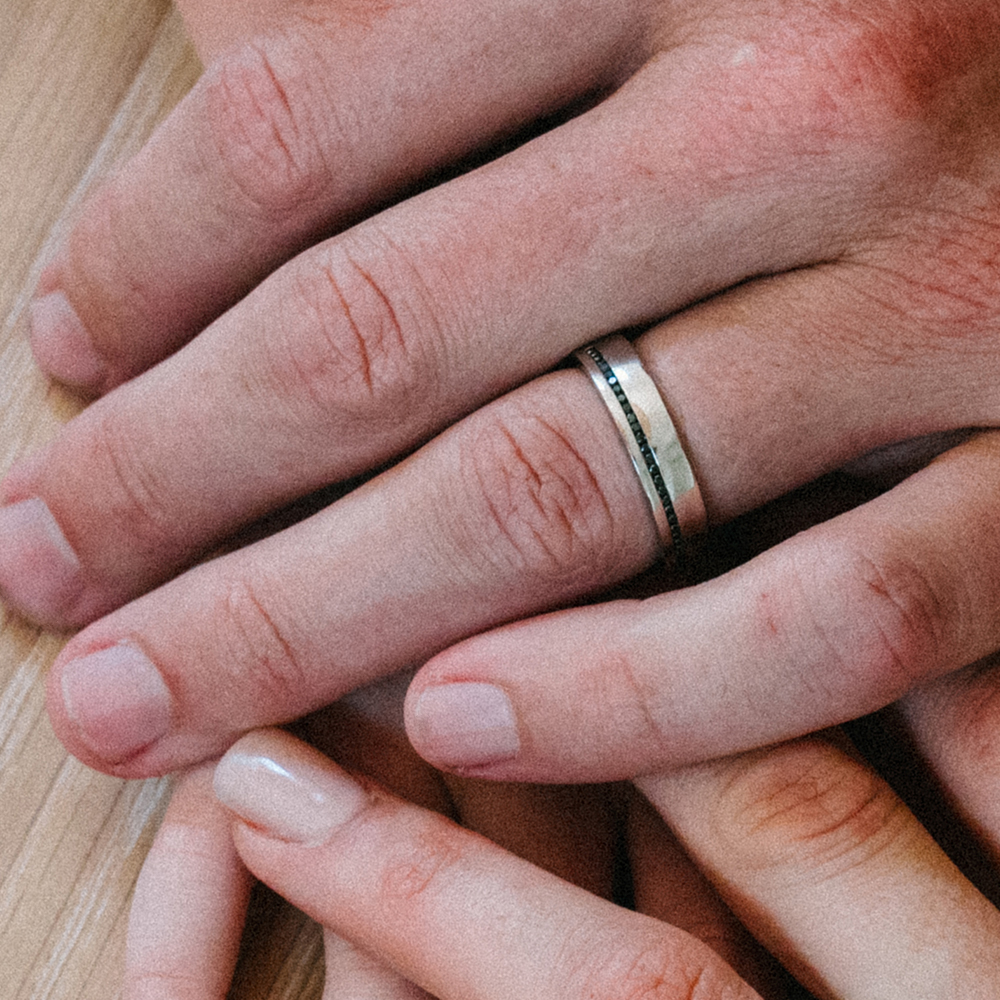 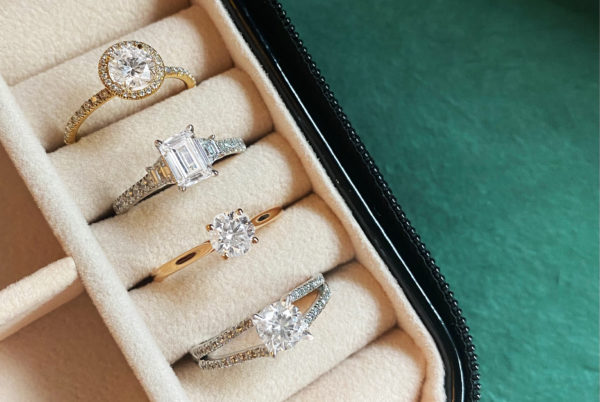 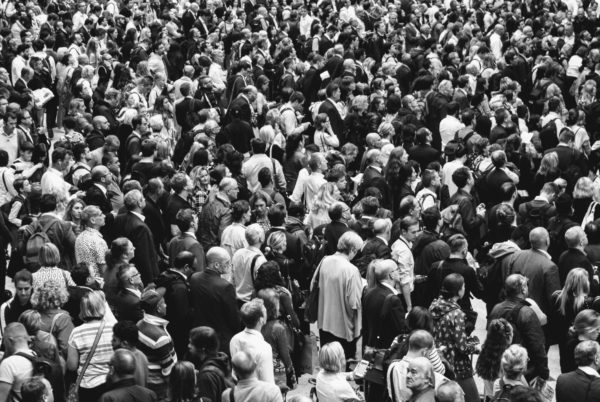 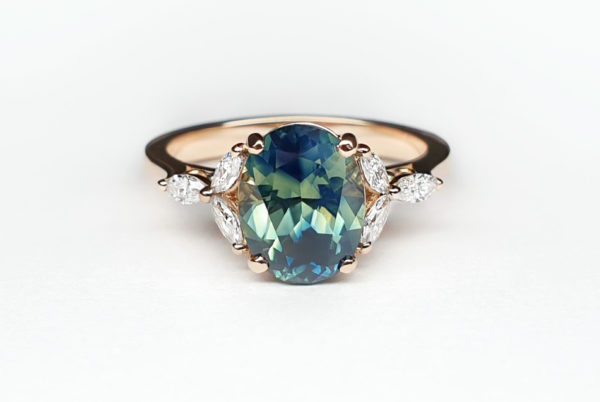 Your guide to bi-colour sapphires